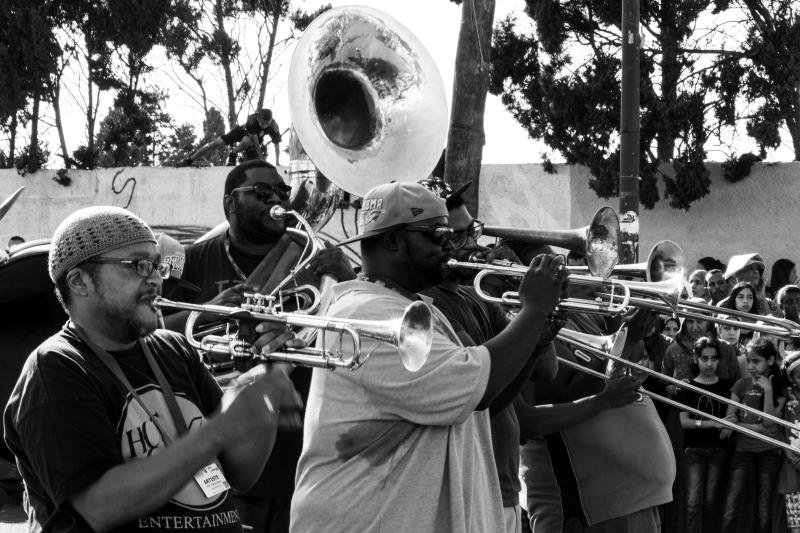 From New Orleans, down to Rabat, The Hot 8 Brass Band crossed the Atlantic to revive the tradition of the marching band in an African spot. Part of the street program in Mawazine Festival Rhythms of the World, Hot 8 Brass band played for four days in four different parts of the city. Marching down the hot and even mean streets of Rabat had probably some significance for the Afro American Band as well as for Moroccans.

With trumpets, saxophones, trombones, a snare and a rumbling tuba, the Hot 8 Brass Band appealed to passersby and initiated. The sound was spontaneous and familiar as band members howled vocals, danced and clapped. Overlapping hip hop style in vocals, screaming to be heard, and funking it up, the hot and spicy band delivered their catchy tunes with ease. The solos flowed easily in the streets to offer images to the Moroccan passersby or stoppers who enjoyed with amazement the wonders and joys of playing street jazz.

The fast groove driven by snare tapping did stir heat in the audience. The call-and-response style, backed by drumming and tuba, involved all the more passers who followed up with clapping. The ability to sway into different flavors was by far one of the hallmarks of the band. Bebop trumpet solos flowed in "We Are One," while Latin sway was provided through "Bingo Bango." On the other hand, funk reached its top with "What's My Name." And with "Ghost Town," The Hot 8 Brass Band displayed their ability to bring plaintive sounds through lower register blows, together with funky, jolly drums attended by scatting.

With the hot 8 brass band, the New Orleans approach to music could be exported in every place where beat and rhythm gain significance over structure. Morocco's variety of musical experiences and openly responsive culture was a significant place to experience the feel of street jazz.

About The Hot 8 Brass Band