By EYAL HAREUVENI
November 9, 2006
Sign in to view read count 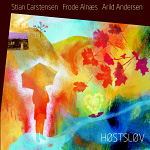 Høstsløv (Autumn Slow) is the third seasonal offering by the Norwegian bass master Arild Andersen and two of his fellow countrymen, guitarist Frode Alnæs and accordionist Stian Carstensen, after covering traditional Norwegian summer songs on Sommerbrisen (Summer Breeze) (KKV, 1998) and old and new Christmas carols on Julegløggen (KKV, 2003). Høstsløv is another collection of familiar songs, played in a joyful and relaxed manner with loads of grace and charm.

Andersen and Alnæs have been collaborating for more than twenty years, as members of the Masqualero quintet and later on Sagn (ECM, 1990), Andersen's first foray into covering Norwegian folk songs. Carstensen is one of the most versatile players in Norway, the leader of the Balkan, boogie and anything else outfit Farmers Market and a collaborator with such diverse musicians as English saxophonist Iain Ballamy and gypsy guitarist Jimmy Rosenberg.

Together these players don't need to show any spark of virtuosity, just enjoy the emphatic and intimate presence of each other, and delve into these well-loved songs. Their label promises that "a basic premise of the trio project is to perform their music in the studio under the determined influence of typical seasonal delights, hence the drowsy title after they have tasted the autumn game stew, autumn berries, Spanish red wine and Calvados."

And indeed they manage to deliver the autumn in its myriad colors and moods, usually suggesting an optimistic and smiling look on the season. They approach the songs as if all were part of a rich one-world folk legacy, charging them up with a vibrant musical zest. They mix seven traditional Norwegian songs with some standards—"Singing in the Rain," "September Song," "September in the Rain" and "Autumn Leaves"—and a few old pop gems, like Tom Jones' "Try to Remember" and Burt Bacharach's "Raindrops Keep Falling On My Head." A few more recent ones included as well, like Sting's "Fields of Gold" and Neil Young's "Harvest Song," make perfect sense.

Alnæs pays tribute to some guitar heroes, especially with his Knopfler-ian solo on "Fields of Gold"; Andersen elaborates "September Song" and "Haust" with a rich vocabulary and a precise sense of time; Carstensen, in a very restrained form here, cradles the music and adds ironic lines. The performance, captured beautifully at the Rainbow Studio by sound engineer Jan Erik Kongshaug, flows gently and shines throughout.

Visit Arild Andersen on the web.