On its own terms, United States is actually–dare we say it–fun. Granted, you have to un-hear the lyrics. 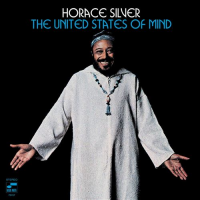 At what point did Blue Note Records jump the shark? Is there a single moment when Blue Note stopped being the world's greatest purveyor of jazz and instead became an irrelevant producer of schlock?

Some say the low point came in 1970 to 1972 with three Horace Silver albums known collectively as The United States of Mind.

Or so I had heard. I wanted to find out for myself.

And so I sought out The United States of Mind with great trepidation. I had heard and read horrible things. It was sappy, naïve, schlocky, anti-jazz.

Who said that? Almost everyone.

Knowing all that, I found the 2-CD set on Amazon and bought it. I wanted the full treatment—music, liner notes, the whole deal.

It's easier to say what The United States of Mind is not, than what it is.

It is not hard bop. There are 28 tracks and only the first, "That Healin' Feelin,'" is instrumental bop. The albums aren't soul-jazz, either, although many tunes are soul-ish. It's definitely not fusion. It's also, blessedly, not a record of beeps, boops, tape loops and non-musical sounds. It is not, thank God, John Lennon and Yoko Ono's Two Virgins. State of Mind is mostly pop with tinges of soul-funk. Above all, it is vocal. And therein lies the problem.

What's to dislike about The United States of Mind? Let me count the ways.

No. 1: Pop vocals. Yes, this is a very long themed record of pop-jazz-soul singing. Each song is three or four minutes long. Most are sung by siblings Andy or Salome Bey. Nothing wrong with pop vocals. There are plenty of terrific jazz-pop singers. Ella Fitzgerald is arguably a pop singer. It's all in the choice of material. And some of the material here is slight.

No. 2: The lyrics. Yep, there be dreck here. United States of Mind is one long, icky diatribe by Silver about healthy eating, exercise, mind-body coordination, peace, love and blah-blah-blah. For example: "We should select natural foods / and see that we bring about / the proper sanitation / within and without." Or this: "I've had a little talk with my stomach / and I've decided to treat him right / We've made a mutual agreement / and I think at last we've both seen the light." Cringe, cringe, cringe.

No. 3: Electric piano. Yep, it's the early 1970s. Yep, it's the era of electric Miles, Chick and Herbie. Go with the flow. But still, Horace Silver shouldn't sound so tinny and twee. Maybe if it were cutting edge fusion, but... no, it's more like piano lounge keyboards. Ick.

The One Big Turn-on

And yet... the music is happy and funky. Honest.

Here's the great big hidden secret of The United States of Mind. Put aside everything else. Put aside your expectations, put aside the sappy lyrics and just hear the music. It's catchy. It's cool. It's full of funk and beat and delicious melody.

Oh my God—The United States of Mind is one long upbeat pop album. Forget jazz. Pretend you've never heard Horace Silver before and make believe he never created some of the greatest jazz ever. Pretend he's not a 5-star, grade-A pianist.

On its own terms, United States is actually—dare we say it—fun. Granted, you have to un-hear the lyrics. And you have to put yourself in the mindset of 1970-72, the era of immediate post-Beatles singer-songwriter pop. Is it Sly and the Family Stone funky? Well, no. Is it Cat Stevens, James Taylor and Carole King touchy-feely? Not that good, actually. But is it the worst series of albums ever forced onto the ears of man? No no no. It's just not at all what anyone expected from a soul-bop master.

In the end, United States of Mind is a victim of listener expectations. If you expect the best, as many listeners did in the 1970s, you'll be disappointed. But if you expect an abomination—as I did—you'll be pleasantly surprised at its sunny, incessant tunefulness.

Low praise? Sure. No one will ever call The United States of Mind a high note in Blue Note's magnificent catalog. But it's not the horror show some believe, either. It's pleasant and even fun, as long as you don't take it too seriously.

Availability: Surprisingly hard to find—at least at any affordable price