By MARK SULLIVAN
January 23, 2015
Sign in to view read count 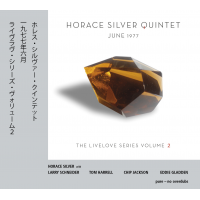 When the Horace Silver Quintet took the stage in Bremen in June, 1977, Silver was nearing the end of his long association with Blue Note Records. Much of the band's book was drawn from recent albums: the title tune from In Pursuit of the 27th Man (Blue Note, 1973), and two each from Silver 'N Brass (Blue Note, 1975) and Silver 'N Voices (Blue Note, 1976). Producer Peter Schulze's liner notes tell the story of how the show also became probably the premier of a spontaneous live broadcast on German radio when it was decided to "go live" at the last minute instead of recording and broadcasting at a later date, as was the usual practice.

This was an open air show, so it's not surprising that there are no ballads: the whole program is pretty up-tempo. The closest thing to a ballad is the gentle waltz "Barbara" (which also has the most conventional song form in the set), but it's still moderate rather than slow. With most of the song lengths topping the ten-minute mark the band gets plenty of space to stretch out, which they take full advantage of. This is not one of the earlier Quintets that are generally regarded as classic (e.g. the one with Junior Cook and Blue Mitchell, or later with Joe Henderson and Carmell Jones). But fortunately no one told them that! When Silver generously uses "we" to include them with the earlier groups that originated this music, he's not exaggerating.

Some of the many highlights are Chip Jackson's funky bass guitar solo on "Sophisticated Hippie" (a tribute to Duke Ellington); the intense section of trading fours on "Incentive" (featuring tenor saxophonist Larry Schneider, trumpeter Tom Harrell, and drummer Eddie Gladden); and Gladden's drum solo on "In Pursuit of the 27th Man." Silver himself plays beautifully throughout, as always, even opening the set with a solo introduction to "Out Of The Night Came You." No Horace Silver performance would be complete without including the classic "Song For My Father," which the band wisely saves for the final fiery selection.

Probably the most striking thing about this recording is how vibrant it sounds. Silver's music was full of life, and he makes 1977 sound like it could be tomorrow. It's a splendid addition to Silver's discography, and beautifully recorded by Radio Bremen.

Out of the Night Came You; Sophisticated Hippie; Barbara; Incentive; In Pursuit of the 27th Man; Song for My Father.