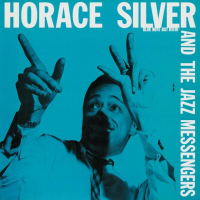 And now we reach the point in our program entitled, "What's The Point?"

As in: You already know this album, you may already own this album, and yet here we are, discussing an album that's 59 years old and so widely synonymous with hard bop and Blue Note Records that it was featured on the promo page of All About Jazz's special magazine dedicated to All Things Blue Note.

In other words, it's like trying to review Sgt. Pepper. Could we possibly say anything you haven't already heard?

For starters, the obvious: Horace Silver and the Jazz Messengers is a terrific record. You can put this in the car CD player, hit REPEAT and listen to it over and over again without getting too tired of it. (OK, maybe after 3 times you'll want to switch to the Ramones, or Willie Nelson, or Bach, just for a change of flavor.)

Yes, Art Blakey is here, though not as prominently as in later Messenger albums. Yes, Horace Silver is the leader and the guy who wrote 7 of the 8 wonderful tunes. (Hank Mobley contributed one, too, called "Hankerin.' ") But it is truly a group effort, the strength being not only the solos but the perfect unison themes and choruses.

The music, naturally, is all bop—or mostly bop. "The Preacher" is the standout tune, but also the anomaly. It's a real New Orleans-style gospel-ish number that sounds vaguely like "Down by the Riverside." (Somewhere in the TV show Treme, someone must have played this song—or should have. God, I miss that show!) "Creepin' In" is a slow burner, a smoky blues noir piece that would fit nicely in any number of Humphrey Bogart movies. And, of course, there is fast, fun, funky bop galore.

You know the history. Silver soon dropped out of the band, Blakey picked up the baton and turned the Jazz Messengers into the all-time greatest school of hard bop in history. More great musicians than you can count came from this band over the decades. But it started here—the first album released under the Jazz Messengers name—and arguably it never got better.

There are no bad Messengers albums. Every one is worth hearing and owning. But there are two or three albums at the absolute pinnacle, and this is one.

About The Jazz Messengers