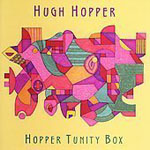 In chronological terms Kevin Ayers and Hugh Hopper were the bass players in the most worthwhile editions of the British band Soft Machine, an outfit which, in the days before they became a fairly routine jazz-rock band, exhibited truly progressive ideals in terms of musical scope. Hopper left the band in 1972, and in August of the same year he recorded the album 1984 (reissued by Cuneiform in 1998), which the benefit of hindsight reveals as containing some of the elements of his old band's work that he took away with him.

Hopper Tunity Box came later in the same decade and, with the exception of Ornette Coleman's perpetually idiosyncratic "Lonely Woman, it consists of Hopper compositions, all of which showcase his individuality both as a composer and instrumentalist.

In both respects Hopper was fortunate in acquiring the services of musicians entirely sympathetic to his cause. On the title track, for example, not only does his own recorder playing have the effect of making the theme statement resonate in a way it might otherwise not have, but Dave Stewart's keyboards have the effect of furthering the piece so that the listener's attention is caught by elements that are anything but run-of-the-mill.

"Miniluv," which crops up in two versions on the reissue of 1984, gets an entirely different reading again here, which demonstrates how averse Hopper is to repeating himself. Gary Windo's fractious tenor sax puts an edge on proceedings in which many a lesser player might have floundered at the same time as he too proves himself to be entirely in sympathy with Hopper's agenda.

Very few ballads have arguably been as aptly titled as "The Lonely Sea and the Sky," and both Hopper's old Soft Machine compadre Elton Dean on saxello and Mark Charig on cornet are vital to its lyrical realization. The piece also offers ample evidence of how Hopper's art is not lacking in facets just as much as it does his abilities as a bassist of rare and welcome economy. It's not difficult to see why he was Carla Bley's bassist of choice around the same time.

The fact that there is no additional material on this reissue is irrelevant, not least because there is already an abundance of music. In more recent times it seems as if Hopper has moved on to occupy different musical spaces. This has had the effect of putting some kind of seal on this title, but the music here is still the work of a man for whom the territory of jazz-rock implied a whole lot more than an excuse for endless rounds of virtuoso soloing.