Donna Khalife: Hope is the Thing with Feathers

By IAN PATTERSON
January 14, 2020
Sign in to view read count 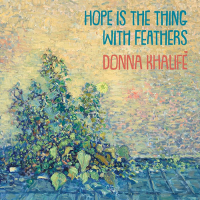 Two-and-a-half years after her powerful debut, Heavy Dance (Self- Produced, 2017), Lebanese double bassist and singer Donna Khalifé returns with another sparkling statement. It is not an especially long time between releases, but there are significant differences between the two recordings. Heavy Dance, with guitar and saxophone to the fore, was a frequently stormy affair of edgy dissonances, odd metres and punchy angularity. Hope Is The Thing With Feathers, by contrast, is a more melodious experience. Its colors are brighter and less introspective, its overarching tone more optimistic.

The musical evolution may reflect Khalifé's return to Lebanon after twelve years in France—a change of mindset? The instrumentation is slightly different from her debut; gone is the electric bass and in comes electric piano. Only French saxophonist Phillipe Lopes de Sa remains from Heavy Dance, with Khalifé surrounding herself with local musicians; guitarist Raffi Mandalian, drummer Fouad Afra and Fender Rhodes maestro Arthur Satyan all played with Khalifé prior to her move to France, so the chemistry on display here should come as no surprise.

Looped vocal harmonies form an ethereal intro to "My Favourite Things," the one jazz standard on the album. Khalifé's original arrangement of this Richard Rogers/Oscar Hammerstein classic layers choir-like vocal harmonies, lush string textures courtesy of the Malmö-based Vindla String Quartet, and strong solos from Mandalian and Satyan. The elegance of the Vindla String Quartet comes into sharper relief on "Uti Var Haga," a serene yet uplifting Swedish folk song of hymnal qualities. Khalifé sings this centuries-old song in Swedish and, in such a spare setting, the purity of her voice is perfectly framed.

Khalifé combines wordless vocals and lyrics of a poetic bent on "Vocalism," a slow-grooving tune with Mandalian's lyricism to the fore. The compelling title track is inspired by Emily Dickinson's poem of the same name. Lyrically faithful, Khalifé's arrangement carries a very personal stamp, with meditative vocal harmonies and gentle strings giving way to mantra-like rhythms and Lopes de Sa's soaring soprano lines. Equally striking is the Arabic-sung "Koutalon Khars," which moves from abstract—though arresting—beginnings to more mainstream jazz language, with guitar and vocals in unison. Khalifé's free-flowing improvised scat is juxtaposed against the finely orchestrated vocal harmonies which follow.

Freedom and form go hand in hand on "Romane," with circling rhythmic currents underpinning Lopes de Sa's expansive soloing. "Ta'iran," a feature for Khalifé's beguiling, wordless singing, is a more rhythmically direct and melodious affair. The singer alternates between wordless and lyric vocals on "Sultan," a multi-layered journey of dreamy melodies, interlocking rhythms and emotive soloing from Satyan and Lopes de Sa. Closing out the album, Khalifé revisits "Uti Var Hagge," though this time in straight-ahead jazz mode. Afra's brushes and the leader's earthy bass provide the bedrock for bright solos from Mandalian and Lopes de Sa, with the song's melodic integrity preserved.

With Hope Is A Thing With Feathers Khalifé strikes a fine balance between improvisation and structure. There is real craft in her arrangements and the playing throughout is first rate. Accessible yet never predictable, these are songs that seduce and surprise in equal measure.

Title: Hope is the Thing with Feathers | Year Released: 2019 | Record Label: Self Produced