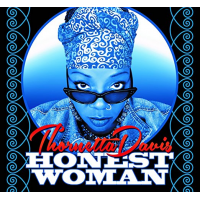 Twenty years might seem like a long time in between records, but for blues singer Thornetta Davis, it's always been about getting it right. Started to sing at age fifteen, joined several bands as vocalist, released Sunday Morning Music in 1996. Fast forward to today and Honest Woman reveals Davis as a mature, commanding vocalist, introspective composer, and demanding producer. Long before Motown, Detroit had an illustrious history associated with the blues going back to the days of Hastings Street, and Paradise Valley (1940's & '50's) so for Davis to be named Detroit's Queen of the Blues, is much more than a title, it is recognition from the people who know the music and its importance to the city.

This is hard edged urban blues, staying true to the trials and tribulations of lost love and heartbreak, yet is enveloped in high hopes for tomorrow by a woman who is as tender as she is tough. Davis wrote all of the material, and the songs are personal statements that take a lifetime to achieve, and careful listening to assess. "I Gotta Sing The Blues" kicks things off as a duet with harmonica wizard Kim Wilson of Fabulous Thunderbirds fame. This track lays the groundwork for the up-tempo direction of the record, continuing with "That Don't Appease Me," a guitar riff driven rocker, while slipping into the funky gospel tinged "Set Me Free," featuring the Larry McCray Band.

It's down to the gritty blues with "Am I Just A Shadow," a mournful ballad that has Davis presenting her capability to hang emotions on the microphone. "I'd Rather Be Alone," is another slow burner that is from the Etta James school of hard knocks, and where Davis really shines. She pours on the sensuality with the rumba paced "I Need A Whole Lotta Loving To Satisfy Me," and the grinding "Can We Do It Again," which are perfect for those late night sets at the local blues club.

There are further shades of gospel in "I Believe (Everything Gonna Be Alright)" which leads into "Sister Friends Indeed," an opus to women everywhere to stand together and help each other. Excellent arranging in the music, intensifying with the expanded choir, making this one of the highlights of the record. Davis brings it home on "Honest Woman," complete with horns, for the classic rhythm and blues feeling she knows all too well. She wraps it up in soulful recognition of her faith on "Feels Like Religion," as the spiritual is cranked up with electric guitars and old fashioned shouting, raising the roof, for the light to shine in.

Thornetta Davis is a one woman blues machine, she cuts an imposing figure, has the voice that demands attention, and in live performances she controls the stage as she takes care of business. Blues singers are a rare and endangered species, for the circumstances and situations that were the foundation for the music, have changed dramatically in the modern age. Davis is a welcome throwback to the performers who lived the life they sang about, and that's as honest as one can get.

When My Sister Sings The Blues; I Gotta Sing The Blues; That Don’t Appease Me; Set Me Free; Am I Just A Shadow; I Need A Whole Lotta Lovin To Satisfy me; I’d Rather Be Alone; I Believe (Everything Gonna Be Alright); Sister Friends Indeed; Get Up And Dance Away Your Blues; Can We Do It Again; Honest Woman; Feels Like Religion.