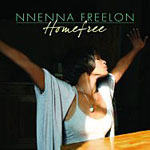 Nnenna Freelon can be spotted miles off, like neon or a rainbow. The tall, rawboned, outspoken gal from Cambridge, MA via North Carolina owns a musical persona as unique as her name. She nails her ancient/modern, genre-jumping repertoire, embraces it, inhabits it organically and belts it with a hearty, emphatic attack.

You can tell her from a phrase—even a note—as she goes merrily variegating vowels, taffy-pulling syllables, signifying scat sounds (gong-gong), sing-songing exit vamps; check her risqué post-play on "The Lamp Is Low."

She and her working band of 10 years—Brandon McCune (piano), Wayne Batchelor (bass), Kinah Ayah (drums) and Beverly Botsford (percussion)—mess with usual tempos ("Smile" as breezy Latin) and keys ("I Feel Pretty" in minor). They gleefully reinvent Tin Pan Alley, here skanking up Cole Porter's "Get Out Of Town" as reggae and Dietz-Schwartz' "You and the Night and the Music," over a slow slinky vamp. Freelon sometimes lobs original blues bombs, wry comments on contemporary mores: she recasts an old favorite ("Future News Blues") in a personal tweet at her quick-twittering-but-not-so-handy man in "Cell Phone Blues."

Even with all that, expect the unexpected. Freelon can wear down the unwary, lazy listener, in her persistent quest to rediscover tunes, with her indefatigable energy. Witness her closing three tracks. She turns "Skylark" from jazz hymn into a bluesy, cantankerous one-on-one with Wayne Batchelor's bass that Hoagy Carmichael and Johnny Mercer—even Carmen McRae—might dig (her devoted version with strings came in 1992, big-budget Butler days at Columbia). She transforms the gospel song "Lift Every Voice and Sing" with a bit of scat over a respectful rap cameo by her son, Pierce. Her angular, salty "America The Beautiful," with cello sweetening, takes the disc out with an uneasy feeling. Freelon's compelling, searching artistry never lets up, yet leaves you with more grins than furrowed brows, with more questions than answers. .

The Lamp Is Low; I Feel Pretty; The Very Thought of You; Theme from Valley of the Dolls; Smile; You and the Night and the Music; Cell Phone Blues; Get Out Of Town; Skylark; Lift Every Voice and Sing; America The Beautiful.