By GLENN ASTARITA
December 30, 2018
Sign in to view read count 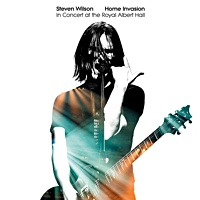 One component of progressive rock composer/vocalist/guitarist/ Steve Wilson's widespread appeal pertains to his rather boyish charm and heartfelt vocal delivery. A strong composer and supreme melody-maker, the artist seduces the audience with the notions of living and breathing the experiences and implications of a song's lyrics. And he helped pave the way for post progressive rock stylizations as the founder of the hugely successful and influential band, Porcupine Tree. Moreover, he's collaborated with several named artists and ensembles over the years while also excelling as a producer and audio-engineer amid his remixes of classic prog albums by King Crimson, Yes, Roxy Music and other trailblazing units.

This 2-CD and DVD edition (also released on Blu-Ray and 2-CD +Blu-Ray) is culled from Wilson's third and final set at London's storied Royal Albert Hall in March 2018. He performs 10 of the 11 tracks from his largest selling record, To The Bone (Caroline International, 2017). The remaining works are culled from his previous albums. However, the film footage includes pans, zooms, special effects, mood lighting, trippy superimposed scenes and animations on the big screen behind the band, often paralleling the musical storylines. It all instills movement and theatrics to complement the ensemble's colorful stage presence.

A few band notables include renowned jazz, jazz fusion and multi-genre keyboardist, Adam Holzman, who gained notoriety during his four-year run with Miles Davis back in the 1980s —he also served as his musical director. While bassist and Chapman Stick performer Nick Beggs (The Mute Gods, Lonely Robot) holds down the fort and harmonizes with the frontline.

Celebrated Israeli vocalist Ninet Tayeb joins Wilson on "People Who Eat Darkness," which is a ballsy and sassy rocker while other highlights on this set feature Wilson's raw energy morphed into finesse and aplomb atop Beggs' limber and pliant bass notes and Holzman's multifarious effects and background treatments. In addition, Tayeb appears on select tracks and possesses a heavenly and entrancing voice, and as a solo artist, has wowed audiences in Europe and abroad

It's music with a message and a vividly entertaining live performance arranged with mutable cadences. And on "Perpetuating," Wilson toggles between singing a rock lullaby and exerting a bold and commanding presence. Yet he launches into a falsetto voice on the dramatic and revved up "The Same Asylum as Before," as he brings the audience to its feet on "Sleep Together," commencing as a mysterious and unnerving opus that flows into a slamming prog metal motif. Indeed, it may be difficult to escape Wilson's custody during this home invasion that tenders a prismatic audio visual spectacle, coupled with his sprawling artistic capabilities.

Truth (Intro); Nowhere Now; Pariah; Home Invasion / Regret #9; The Creator Has A Mastertape; Refuge; People Who Eat Darkness; Ancestral; Arriving Somewhere But Not Here; Permanating; Song Of I; Lazarus; Detonation; The Same Asylum As Before; Song Of Unborn; Vermillioncore; Sleep Together; Even Less; Blank Tapes; The Sound of Muzak; The Raven That Refused To Sing. + DVD (included bonus tracks).