Home Away From Home: Avishai Cohen in Paris 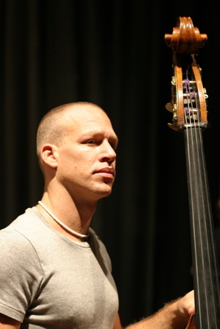 Hypnotic. Mesmerizing. Religious. These three adjectives come to mind when reflecting on Avishai Cohen's concert at Alhambra in Paris, the last of a three-night engagement at the intimate venue close to Place de la République.

A sorrowful piano/percussion duo—Shai Maestro's weeping piano accompanied by Itamar Doari's melodic percussion—set the stage for what was to be a celebration of not just the talents of the five musicians in Cohen's group, but also of music itself and its power to lift the spirits of those lucky enough to hear it. The group consisted of Cohen (bass), Maestro and Doari along with Amos Hoffman (oud, guitar) and Karen Malka (vocals), but the concert really consisted of a number of combinations within the greater group. The genius of these musicians was knowing when to lay out and also when to re-enter to the greatest effect. Each musician was capable of adding percussive elements to his or her instrument, allowing even Doari to occasionally operate free of timekeeping duties.

The piano/percussion intro led into "Morenika," which was followed by an inspired version of "Leolam." But just naming the songs here would do the show no justice. Each tune evoked more of a mood, an atmosphere. Whether songs of deep sadness, untiring determination or unbridled joy, each offering ended in triumph, both physical and musical. Ultimately, the tunes melded into a single long piece (peace, if you will), and the greatest compliment that can be given to the music is that, while I don't remember what notes were played, I remember exactly what I was thinking at each moment.

Along the journey, the playing was superb. Doari's percussion work was magical. Cohen himself put it best, saying (and I'm paraphrasing), "The great thing about Itamar is he makes the music and the people he plays it with happier and better off." Doari was consistently able to balance being the anchor behind the group with coloring the often vast percussive and melodic landscapes created by his bandmates. Cohen, meanwhile, combined the dexterity of a guitarist with a drummer's sense of time and groove. His everyman voice is a spot-on match for his inspired compositions.

Maestro is remarkable for the emotion he puts into each note. He was very close to leaving his native Israel for the Berklee School of Music when he got the call to join Cohen, and what a fortuitous change of events that was. There are some musicians for whom a musical education would be quite limiting. Maestro is certainly one of them. He is as equally capable of taking a beautifully melodic solo as he is of turning the piano into a percussion instrument and banging out chords. Hoffman was a contrast in style to the other four. He sat down and barely moved the entire night, yet he took full advantage of the little space that was given to him. His oud solo intro to one of the songs later in the set was certainly the most lyrical of the true solos of the evening.

Cohen is on tour in support of his new album, Aurora (2009, Blue Note), a record of unmistaken passion whose beauty is lost on those who have not seen the bassist in concert. How do I know? Because I was anxious going into the concert—anxious that the show might be weighed down with too much of the dreary drone of Aurora. However, having heard a number of the songs in a live setting, I left with a newfound appreciation for the album.

Cohen's music melds traditional Israeli styles with jazz and even some pop sensibilities, producing a music as equally based on composition as on improvisation. His compositions are not remarkable in and of themselves; they are made remarkable by those who play them. They would not adapt well to being covered by lesser musicians. The key element is belief. Cohen and his bandmates may or may not be religious, but they believe in what they're playing with every bit of themselves. There is no hesitation.

And so the music became euphoric. The musicians continued to push each other to new heights. The sheer physicality of it was something to watch in and of itself. After each song, it seemed as if each musician was breathing a huge sigh of relief. They had just navigated through the toughest part of the evening. But then, after a minute or two to towel off, they were at it again, given more energy by the enthusiastic Paris crowd.

Playing in Paris is a true meritocracy, where the musicians are rewarded for performing well. On this night, the musicians were able to give back to the crowd as well. Playing a four-song double encore, Cohen and his compatriots expressed their gratitude through their music, finishing by inviting the crowd to sing along to "Shalom Aleichem." Sometimes a concert can change your entire outlook on life. Avishai Cohen's show at the Alhambra was one of those times. Marvelous.