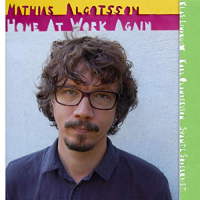 Mathias Algotsson's music resembles the provincial Swedish society that he calls home: well thought-out and carefully executed with few surprises. He sees music as his work and, because he produces it at home, called his first album Home At Work. It is no surprise that the follow-up should be titled Home At Work Again.

Algotsson has assembled a highly competent band of local musicians to play with him. Like him, some have backed Swedish vocalist Carin Lundin, though trumpeter Karl Olandersson is well known for his work with the Stockholm Jazz Orchestra. Olandersson claims to have played his first notes on trumpet at the age of two—albeit with a little help from his father. After studying at the Royal School of Music in Stockholm, he freelanced in diverse musical styles. When it comes to jazz, he has played traditional, swing and bebop, but has a special liking for music from the '60s.

ADVERTISEMENT
This album's opener, the Latin-tinged "From Time to Time," is relaxed and melodic, underpinned by Svante Söderqvist's bass. "Copenhagen," Algotsson's tribute to the "lovely old queen of the sea" across the water, is a jaunty piece that reflects the city's happy-go-lucky spirit. Olandersson recovers quickly from a ragged start to contribute a controlled but inventive solo. Some of Algotsson's songs are like show tunes, waiting for someone to put lyrics to them.

"Everything in Time" features the leader doing a fine job on piano. "Jazzlines" is a quirky little number. The slow, melancholic "More to Go" closes the set featuring Algotsson and then alto saxophonist Klas Lindquist followed by a sensitive contribution from Olandersson. "Attundafolk," with tight ensemble parts, a lyrical solo from Lindquist and excellent bass from Svante Söderqvist, is the best track on this album.

From Time to Time; Copenhagen; Brothers; Everything in Time; Jazzlines; Attundafolk; More to Go.