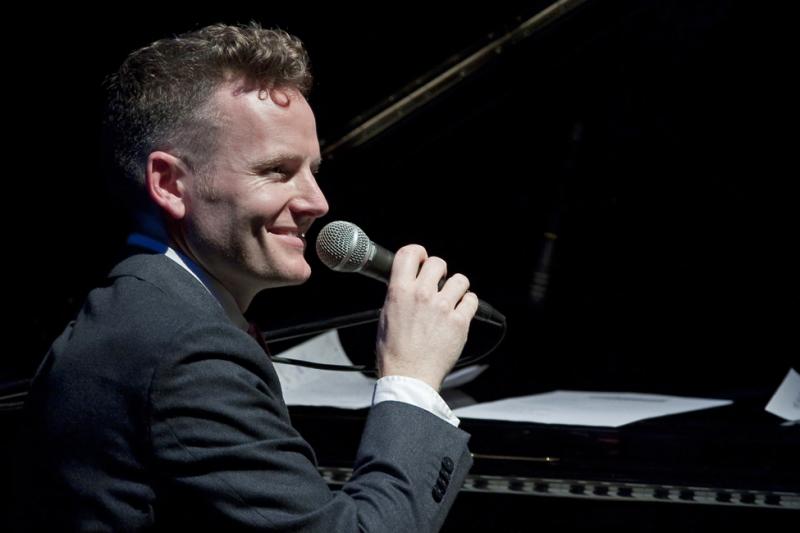 The nine-day Holt Festival is an intriguing mix: visual arts, theatre, literature, music and comedy all graced its 2014 program across a range of venues in and around the town.

The Theatre In The Woods is the jewel in the festival's crown of venues: a 900-seat open air amphitheatre nestling secretly under cover of trees. Think Hollywood Bowl, but prettier. For the 2014 festival this delightful venue hosted literary discussions, historical debate and a closing night concert by punk icons The Stranglers. Jazz didn't grace this bucolic setting this time around, but in the form of vocalists Joe Stilgoe and Sarah Jane Morris it was programmed in the Auden Theatre, a smaller and more intimate venue that was well-suited to the performance styles of these two excellent yet contrasting singers.

Singer, pianist, songwriter, showman, comedian, improviser and—crucially for this evening's concert—a lover of cinema. That's Joe Stilgoe. A couple of hours in his company passed all-too-quickly as he took the audience on a journey through some of his favourite songs from the movies.

Stilgoe began set one with a solo "overture" encompassing a host of famous movie themes. Most lasted long enough for recognition, but not quite long enough for precise identification: Casablanca, Cinema Paradiso and Chitty Chitty Bang Bang flashed past along with many others, Stilgoe quickly establishing his credentials as a pianist and singer. He began the second set in similar fashion with "Cartooning Up," a medley of cartoon theme tunes.

Bassist Tom Farmer and drummer Ben Reynolds joined Stilgoe on most of the songs. All three were dressed smartly but soberly in dark suits and white shirts (Farmer chose a three-piece combo): a sartorial elegance that gave the band a strong visual image, albeit one that was slightly at odds with the good-natured humor and warmth all three musicians projected. Farmer and Reynolds also added sympathetic backing vocals, along with a brief kazoo interlude.

Stilgoe mixed tales of his love of film with a selection of classic cinema songs and original compositions mostly taken from Songs On Film (Beard Records, 2014). His own "Popcorn" and "Gold On Silver" were nostalgic tributes to the movies and to the cinemas of his youth. During parts of the upbeat "We Should Kiss" his raucous, punchy, vocal recalled Louis Prima: surprisingly, for a musician who's been compared to Michael Buble and Jamie Cullum, but less surprisingly for a man who lists The Jungle Book as a favourite movie.

The film songs ranged from classics of the relatively early days of talking pictures ("Almost Like Being In Love") to modern-ish numbers such as "Raindrops Keep Falling On My Head" and "You Give A Little Love" (from Bugsy Malone). Just one twenty-first century song crept in, the theme from Bond movie Skyfall. Not, perhaps, one that Stilgoe would have chosen on his own, but it joined the theme from Brief Encounter, "Moon River" and the title song from Flash Gordon in a medley based on suggestions from the audience, which Stilgoe performed with a flourish.

Amidst a generally upbeat and up-tempo set the trio's acoustic and unamplified "It Had To Be You" highlighted its subtler approach. Farmer moved to front and center for a bass solo that gradually became recognisable as the songbook standard. Reynolds moved alongside, using brushes on the bass body to provide percussion and Stilgoe, supported by Farmer and Reynolds' vocal harmonies, crooned the lyrics in suitably romantic style before segueing into a chorus of "I Wanna Be Like You" from his beloved The Jungle Book.

Sarah Jane Morris holds a place in the hearts of many fans of '80s pop, thanks to her work with The Communards—their version of "Don't Leave Me This Way" was an international Number One. In more recent years she's developed a reputation as a fine soul and jazz singer—she recorded her third solo album, Blue Valentine (Jazz House, 1994), at Ronnie Scott's and has collaborated with artists such as Marc Ribot, Antonio Forcione and Ian Shaw.

Morris' voice is one of exceptional power, range and expressiveness. Ably assisted by three backing singers and occasional vocal contributions from some of the six instrumentalists, Morris sang superbly throughout the 90 minute set.

Musically this was a tight ensemble, well able to deliver the African-inspired tunes of the original songs on display. The acoustic bass guitar, drums and percussion trio of Henry Thomas, Martyn Barker and Adriano Adewale was the band's heart and soul, central to the irresistible rhythms that had many audience members nodding their heads and grooving gently in their seats from the off. This was good-time, soulful, music.

Lyrically, Morris' songs gave out a very different vibe. She has been known for her political activism for many years and her undoubted sincerity and compassion came over strongly. The messages, told through lyrics that were notable for their blunt directness, were almost all about the downside of life and human behaviour—family violence and honor killing, homophobia, the children of conflict. Even the single tune which Morris referred to as "humorous," a calypso shuffle called "Men Just Want To Have Fun," was intended to educate about the prevention of sexually transmitted infections.

This coupling of danceable tunes and lyrics that spoke often about the inhumanity of the human race led to the incongruent sight of happy, smiling, audience members grooving in their seats as Morris sang passionately about domestic violence, homophobia and honor killings. It wasn't always clear if the messages were hitting home.

Morris performed three covers. David Olney, Daniel Lanois and Emmylou Harris' "Deeper Well" came mid-set, sadly without mention of the writers (even Harris, whose version is probably the best known and who, co-incidentally, was a member of Gram Parsons' Fallen Angels). The two encores were Bob Dylan's "I Shall Be Released" and a reggae version of Jerry Ragovoy and Bert Berns' soul classic "Piece Of My Heart." By now, the audience was on its feet and the gig became one big singalong to draw the evening to a close.