By MARK REDLEFSEN
November 29, 2010
Sign in to view read count 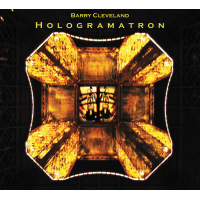 Hologramatron is an imaginative progressive rock-oriented release by guitarist Barry Cleveland. Proficient technique commands attention throughout the entire CD, alongside Cleveland's writing, and arranging of the entire set. The songs are rich in sonic texture, and with panoptic social political messages that require a close listen. Cleveland recruited a number of responsive talented players to communicate with the proper chops and phrases on Hologramatron.

Robert Powell's pedal steel and lap-steel guitars play foil to—and yet also blend with—Cleveland's lead, creating very malleable textures. The collaboration exploits a wide range of guitar sounds that make it difficult to believe that there are no keyboards in the mix. On tunes such as on "You'll Just Have to See It to Believe," a King Crimson-ish chordal interplay occurs between Cleveland and Powell with the best reflections of the dual playing of Robert Fripp and Adrian Belew seemingly in mind. Michael Manring's slurred fretless bass lines answer the two guitarists appropriately, with fills and punctuations that challenge as well as round out the music. Celso Alberti completes the group on drums, using a solid rock beats on "Suicide Train" and plodding drifting rhythms on spacey instrumentals like "Abandoned Mines." The core quartet is augmented by other guest players, along with an array of different vocalists including Amy X Neuburg, Harry Manx, Deborah Holland, and Michael Masley, better known as the "Artist General."

Several of the themes center on post-2008 market collapse angst. Amy Neuberg lays the case out with a furious sacrilegious snarl right from the opening "Lake of Fire." File this entire CD possibly under "New Millennium Progressive Alternative Protest Rock." The lyrics to "Money Speaks" have a certain indicting immediacy that will tastefully date this work going forward as a uniquely expressive period piece. The broad stylistic ranges employed assist to help reveal both Cleveland's impressive musical abilities and his poignant thoughts.

The music has enough space to smoothly segue from the varying eclectic vocal tracks right into the more pastoral and atmospheric instrumental tracks. Greed and spiritual vacancy are not the only focus on this CD. The recent resurgence of interest in the late sound visionary Joe Meek is on display in an updated remake of his 1960s song, "Telstar." The three additional remixes and alternate mixes further allow the more soundscaped side of Cleveland's playing to emerge. Hologramatron is a delightful milestone from an artist with much more yet to say.