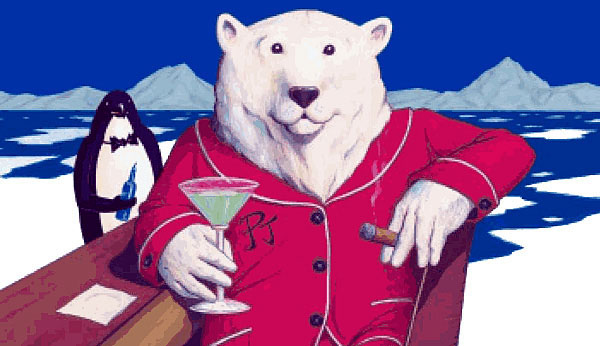 By JEFF FITZGERALD, GENIUS
December 13, 2010
Sign in to view read count
Does it seem like a year has passed since last we gathered to celebrate the holidays, kids? It seems like only yesterday we finished the last of the Thanksgiving turkey, finally put away the extra tray tables, and threw away the untouched remains of that horrid green bean casserole that someone always feels compelled to bring to these otherwise festive gatherings.

Wait, that was yesterday. That's what happens when you play drinking games with The Wizard of Oz. See A Witch, Do A Shot. Glenda counts.

Still, an entire year has gotten away from us yet again. If you are anything like me, and have found yourself suddenly up against a holiday shopping deadline and are now sitting in front of your computer in a cold sweat panic desperately Googling "What to get grandma?" and getting nothing but a lot of well-intentioned articles about senior citizens that don't address the real question of how to buy a gift for someone who may have, back in her day, thrown her underwear at Woody Herman.

Fortunately, there is All About Jazz. Besides being the largest and most powerful force in electronic jazz media in the entire world, the Terex dumptruck of jazz websites, this is also the central clearinghouse for everything the jazz lover needs to survive day-to-day in a world that celebrates disposable autotuned pop more than it does music made by people who have spent more time mastering their instruments than it took to create Miley Cyrus and Justin Beiber combined.

And now, AAJ is also officially recognized by the National Grammar Institute as the Home of the Run-On Sentence. Add that one to the trophy case, Admiral Ricci.

The point I was trying to make before I got distracted trying to lay some Cyrus-Beiber Google bait was that AAJ really is All About Jazz. Not just the music, or the musicians; it deals with anything and everything jazz-related. What to serve with Michel Petrucciani's Power of Three? Sole Meuniere, with a nice Chablis. What to drink in a jazz club so that you don't look like a poseur? Jack Daniels and Mexican Coke in a rocks glass with precisely two cubes of ice. What to buy that jazz-loving (or even jazz-curious) loved one this gift-giving season?

Jazz and alcohol are as inextricably intertwined as Mafia movies and wife-beater T-shirts. Were it not for Prohibition, which proffered jazz as the soundtrack for open-secret blind tigers dispensing illicit booze, Our Music might never have gotten the Decent Society Seal of Disapproval that is essential for the success of any new type of music.

While there are some very deserving jazz-themed potables out there (most notably, North Coast Brewing's very nice Brother Thelonious Belgian-Style Abbey Ale), my coveted Genius Guide Recommendation this year goes to the Limited Edition Dean Martini Set. Packed inside a leatherette case with Dino's signature on it is a stainless steel cocktail shaker, two martini glasses, two plastic olive spears, jigger, funnel and flask. Add to that the wonderfully retro hip My Kind of Christmas CD, and you can't help but score with this goodie.

While AAJ is the undisputed, undefeated heavyweight champeen of electronic jazz media, there are still some great names around producing jazz media using an archaic method of printing words on paper like some cave-dwelling heathens. Among these, The Penguin Guide to Jazz produces one of the most authoritative references detailing recorded jazz. Their ninth edition, published in 2008, is still an excellent source for finding the who-what-when of jazz on CD when you are in one of those rare moments where you do not have access to that Land of Magical Infofaeries called the Internet.

And while it will technically be released after Christmas (scheduled date 12/28), one might still consider pre-ordering The Penguin Jazz Guide: The History of the Music in the 1,000 Best Albums. It will also be released as a Kindle version on Amazon, for those to whom the prospect of actually reading a printed paper book is akin to carrying around a novel chiseled onto slabs of limestone. Considering the impeccable source, I don't need to see it before I recommend it.

Unlike my next recommendation, the documentary Icons Among Us: Jazz in the Present Tense. It is an unfortunate truism of jazz that many of those who love it, myself included, only love it up to a certain point. Like the mullet-impaired 45 year-old who still drives around blasting Whitesnake from the cassette deck in his '86 Trans Am, there is a certain point at which jazz simply stops for some of us.

As much as I hate to admit it, that point comes for me somewhere in the early sixties before Miles went electric and God started telling Coltrane to just blow really hard and see what happens. For me, Fusion never really held much appeal. I didn't care much for the Eurojazz vibe from ECM, and most of what I did dig in the later years was, in all honesty, just old wine in new bottles.

So I was naturally resistant to the idea that exciting new stuff was being made right now by people who weren't born when Trane started jamming with the Infinite. To me, modern jazz—and you'll forgive me for saying this—was like modern art; an inferior product produced by lesser-talented individuals masking a lack of fundamental ability with soulless novelty.

And I was wrong. Icons Among Us presents the new generation of jazz on its own terms, rather than apologizing that it isn't as good as the old or defiantly claiming that the old isn't all its cracked up to be. It allows new music to be measured fairly, and puts a face on those brave few who choose a path they know in advance will not lead to fame or riches except in the most uncommon of circumstances. Much like Your Own Personal Genius, who could probably be making a comfortable living churning out unfunny TV sitcoms rather than writing silly things about jazz if it wasn't for the fact that I'd rather write instruction manuals for toasters than any of the crap currently on the networks.

For the seasoned hipster, or the fledgling JazzNoob, Icons Among Us is very nearly the perfect gift for anyone you care about who cares about Our Music. I confer upon it the coveted Genius Guide Recommendation, which heretofore had not been given to anything that did not contain at least 5% alcohol by volume.

Finally, let us all be reminded once again what the whole holiday season is about. If your economic recovery isn't recovering quite as fast as you'd like, if you're concerned about Wikileaks or Iranian nukes, if you're terrified by the thought of investigative reporters uncovering a horde of undiscovered Kardashians, then this is the time of year to look around you and take stock of all that is good and right in your world. Make sure your loved ones know they are loved. Treasure the silly traditions and useless novelty gifts. Love, and you will be loved. That one small gift, which can not be had at any price, will be more than enough.

Thank you all for allowing me into your lives, however infrequently, for yet another year. I bid you glad tidings this holiday season, and peace throughout the coming year.