The holidays are a special time around the Geniusdome. Luca Brasi, my trusted associate and parakeet, goes all out decorating his cage (featured in this month's Perch Pride magazine). My usual stacks of death threats and hate mail start arriving in festive green and red envelopes. And the ghost of Elvis starts singing actual Christmas songs, instead of just making up dirty lyrics to that "Viva Viagra" commercial and eating all the damned peanut butter.

2008 marks several momentous occasions in the life of your Own Personal Genius. First, there was the (thusfar) amicable dissolution of my marriage to the Once and Former Mrs. Genius. This resulted in my return to the Original Geniusdome, and to the sublime pleasures of bachelor life. And I've finally settled my decades-long feud with Arthur Rankin, Jr. (of Rankin-Bass fame) which means I can cut loose a half-dozen lawyers and once again enjoy such timeless holiday classics as Rudolph the Red-Nosed Reindeer and Frosty the Snowman. And by enjoy, I mean "get drunk and make fun of" which is what started the whole mess to begin with.

These facts, combined with the passing of the legendary Paul Newman (looks like I'll be paying for my own salad dressing from now on), means that my Christmas gift list has been pared to a more manageable number. With only Luca Brasi and Braves slugger Jeff Francoeur to buy for, I plan on using the rest of my AAJ Christmas Club funds to restock the 'Dome's liquor supply from the last time Academy Award?? winner Cloris Leachman was over for the extremely popular Sloppy Joe Nite.

Even though my own gift list is short, I know that holiday shopping can seem like an insurmountable task to some. Particularly for devoted patrons of Our Music, who must always balance the desire to give useful, thoughtful gifts with the need to give presents that also serve the furtherance of jazz. Fortunately, you happened to come to that great central clearinghouse of all things jazz and, after wading through some nonsense about the ghost of Elvis, you've got a comprehensive gift-giving guide just in time to single-handedly rescue the economy from its current doldrums with a round of jazz-themed spending. 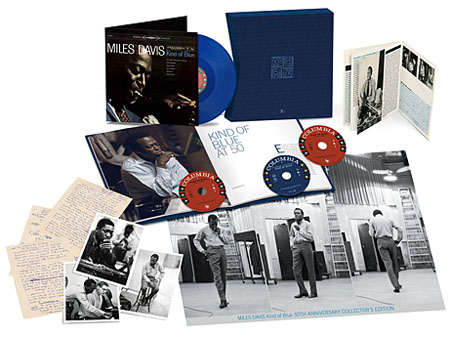 There are, of course, an abundance of jazz-related gifts out there, from the Hickory Farms Marsalis Gift Box (with Branford Beef Stick, Delfayo Danish havarti, and Wynton Wafers) to the Dave Brew-beck Home Beer Making Kit (endorsed by the estate of Paul Desmond). But I'm guessing that you're in the market for something a bit less, well, Wal-Martish to give the gift of Our Music.

Tops on almost anyone's gift list this year should be the 50th Anniversary reissue of Miles Davis' seminal Kind of Blue. The top-selling jazz album of all time, and one of the most reissued (still digging the 46th Anniversary Dual Disc, and the 48th Anniversary Guy Who Went to Grade School With Rudy Van Gelder Edition), this luxurious box set is the perfect gift for the obsessive jazz collector who still complains about the "half-assed" 168-CD Ultimate Jazz Archive Box Set. The handsomely packaged set contains an LP pressed in blue vinyl, two CD's containing the original recordings and alternate takes, a DVD, a 60-page book, six 8x10 photos, and a potato chip that resembles Bill Evans.

For the discerning jazz fan who, like myself, loves both jazz and DVD's, there is the exhaustive Jazz Icon series. It features concert and studio performances by some of the biggest names in Our Music. Available in a series of three box sets, or individually by artist, the series encompasses a Who's Who of jazz from Louis Armstrong to Rahsaan Roland Kirk, Ella Fitzgerald (no relation) to John Coltrane. Where else can you see rare footage of the greatest live performances in jazz history, without risking the unpleasant possibility of seeing Bessie Smith naked?

Now, bear with me a moment.

The advent of digital recording media began in earnest with the CD (compact disc), introduced in 1982 as a replacement for the unsuccessful first-generation RSD (regular-sized disc) which as big as a large pizza and required a player the size of a window air-conditioner. Since the very beginning, devoted audiophiles have insisted that the CD fails to capture the warmth and auditory depth of analog recording. This despite the fact that CD uses a sampling rate sufficient to capture the audible range of frequency from 20 Hz to 20 kHz and does so without the inherent limitations of analog media, such as surface noise or embarrassing album cover art.

There's just no pleasing some people.

Since jazz tends to attract a disproportionate number of folks who swear they can tell the difference between the Klipsch P-39F and the P-38F at 50 yards while wearing earmuffs, reissues of classic jazz albums on vinyl LP continue to be a go-to gift for the discerning Luddite who probably still has a closetful of reel-to-reel tapes somewhere. This year's crop includes several exceptional releases from Concord, available at the Collector's Corner section of their website (Concord Music Collector's Corner), as well as that blue vinyl LP of Kind of Blue I was going on about earlier. 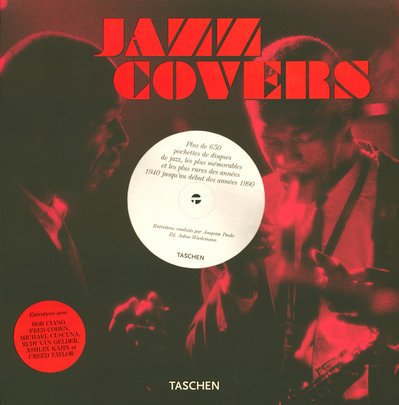 Of course, it isn't a perquisite that one be able to tell that McCoy Tyner's middle C was 5 cents sharp on A Love Supreme to enjoy the sort of album cover art that I was not making fun of a couple of paragraphs ago. Jazz Covers is a 496-page edition documenting jazz album covers from the 1940's through whatever point in the 1990's that CD covers became too small for aging hipsters to see. Each cover is accompanied by such vital information as the art director, photographer, illustrator, and favorite soft drink of each. Who knew Dr. Pepper was so popular among the jazz set?

The early sixties saw a breezy mix of samba and cool jazz enliven cocktail hours in places where men wearing skinny ties put the make on women wearing too much underwear. Few jazz musicians benefited from the craze as did Stan Getz, whose warm, smooth tenor was tailor-made for the style. It was called Bossa Nova, which means "new flair" in whatever jibber-jabber language that Brazilians speak, and was perhaps the last great moment in the history of jazz as popular music. 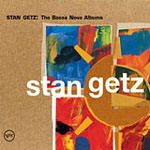 Verve's Stan Getz: The Bossa Nova Albums puts together five of his most notable efforts: Jazz Samba, Big Band Bossa Nova, Jazz Samba Encore, Getz/Gilberto, and Getz/Almeida. Unlike most box sets, the albums are included without augmentation. No alternate takes, no unreleased tracks, no special-edition book, no piece of toast with a burned spot that looks like Charlie Byrd.

Listening to all that Getz might put one in a wistful mood for that Technicolor twilight of American hipness, the martini-soaked calm before the storm that was the late sixties. AMC's justly celebrated Mad Men recalls that era almost perfectly, with amazing art direction and a jazz-heavy soundtrack. Ostensibly a "if we knew then what we know now" social criticism, it most often stumbles when it tries too hard to illustrate the failings of the Greatest Generation. Too self-serious for satire, not enough hand-wringing for melodrama, it ultimately creates a nostalgia for the very age it attempts to indict. And, it features the awe-inspiring Christina Hendricks, whom I'm fairly certain is going to be the next ex-Mrs. Genius if 2009 turns out the way that fortune cookie promised.

The Complete First Season is now available on DVD, and in spite of its shortcomings, is still well worth watching. It also makes a nice gift, which is why I mentioned it.

Well, kids, that ought to be enough suggestions to fill even the deepest stockings. Here's wishing you the very best this holiday season, and throughout the New Year. Till next month, exit to your right and enjoy the rest of AAJ.