By C. MICHAEL BAILEY
December 3, 2017
Sign in to view read count
It was a good year for Messiahs and an equally good one for the "classically-related" repertoire. 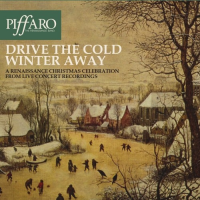 Piffaro: The Renaissance Band
Drive the Cold Winter Away: A Renaissance Christmas Celebration
Self Produced
2017

Lutes, theorboes, sacbuts, recorders, krumhorns, bagpipes, shawms and harps, that is what makes up the instrumentation for popular Renaissance fare, circa 1450 to 1700. Piffaro: The Renaissance Band has carved a career from addressing the music of the period on Arkiv Produktions, Dorian, Navona, and, finally, in the contemporary tradition, the band's own label. Drive the Cold Winter Away: A Renaissance Christmas Celebration is a collection of live recordings made between 2006 and 2013, all captured during seasonal performances. It is the band's second holiday release, following 2005's Nowell's Delight (OOP). True to past form, the band addresses Renaissance music from the Old World: Britain, Germany, France, and Spain. The disc opens with performances of readily familiar Michael Praetorius melodies ("Psallite," "Frohlock o tochter," "In dulci Jubilo," "Es ist ein Ros,") making its way through the rest of the mainland. Most notable is Claudin de Sermisy's Midnight Mass setting of the Agnus Dei. This music evokes less Shelley's "The Eve of St. Agnes" and more of Byron's Childe Harold's Pilgrimage. It is rustic and exciting. 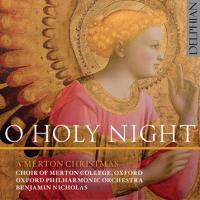 Merton College was the first fully self-governing College within Oxford University, founded in 1264 by Walter De Merton. The Merton (MOB) Library is the oldest continuously functioning library for university academics and students in the world and the college boasts the likes of William Harvey, JRR Tolkien, TS Eliot, and Sir Andrew Wiles. That is a sweet and deeply established pedigree for any educational institution. The Chapel and Choir have as storied a history. Merton College Chapel has existed for over seven hundred years. Work on the church of St Mary and St John, now the Quire of Merton College Chapel, started in the late 1280s. The Choir has produced several recordings, including the present O Holy Night: A Merton Christmas, performed in conjunction with the Oxford Philharmonic Orchestra for this recording of their Director Benjamin Nicholas's favorite popular carols. The program includes two John Rutter settings, "All Bells in Paradise" and "Shepard's Pipe Carol," as well as Hector Berlioz's "The Shepard's Farewell" and David Willcocks' arrangement for "Unto Us is Born a Son." This is a big choir sound splendidly delivered with candle warm British sonics and holiday spirit. 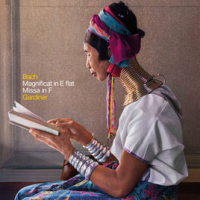 Sir John Eliot Gardiner is doubling back around, reconsidering pieces he recorded earlier in his career. Gardiner and his English Baroque Soloists and Monteverdi Choir committed the revised D Major Magnificat (Arkiv Produktions) in 1983. Now, a year after John Butt and the Dunedin Consort recorded their ultra-stripped-down version in the original key of E flat, Gardiner does the same, coupling the piece with a re-recording of the cantata "Susser Trost, mein Jesus Kommt, BWV 151, and Gardiner's first recording of one of Bach's Lutheran Masses, Missa in F major. The performance is typical Gardiner: rigorously researched, punctiliously performed, and perhaps a bit chilly. The performance, that is. The sonics are warm enough and sharp enough to make this recording of interest. I am unsure if it stands up well against Butt's offering, with Butt being now, with better technology and documentation, where Gardiner was 35 years ago. 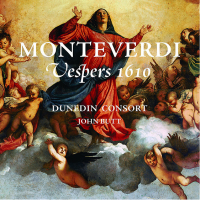 Speaking of John Butt and the Dunedin Consort, they have just produced the Monteverdi Vespers 1610 to beat. This recording joins Butt's previous heralded Messiah and the aforementioned Magnificat in E flat. Crisp, clean and newly investigated, Butt strips things down to the bare minimum and builds his cathedrals with grand spirit and amphetamine-focus to historic detail. The Linn recording is what we have come to expect from the label, sensible audiophile quality without completely losing one's mind, If there is one criticism here, it is Butt's Bach has bled into this Monteverdi, making it a bit like Wagner conducting Beethoven in the respect that it is a matter of looking backward in an interpretation, when the way to do so is look (and listen) forward. Still, there is nothing to disappoint here. 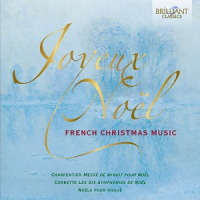 This is a beautiful, sumptuous collection of Baroque French Christmas music dispatched with period-instrument accuracy and historically-performed verve. The recital is divided between two bands: the Aradia Ensemble beneath the baton of Kevin Mallon and the small consort La Fantasia, directed by organist Rien Voskuilen. The former group performs Marc-Antoine Charpentier's "Te Deum," Dixit Dominus," and Messe de Minuit Noël, while the second addresses Michel Corrette's (1709-1795) Les Six Symphonies de Noël. This is an evenly distributed collection of large-and small-ensemble playing that provides an excellent juxtaposition of sound and style from Baroque France. The large ensemble plays with great pomp and gravity while the smaller group captures the intimacy of the parlor or chapel. The Charpentier is performed with warmth and light, the soloists all uniformly fine while the Corrette exudes and instrumental finery well received in these quarters. As would be expected, the French Style is densely in evidence, distinguishing itself from the Italian, German, and English Baroque by its lightness of touch and tone. Joyeux Noël is a pleasant a listening experience as one could hope for this holiday season. 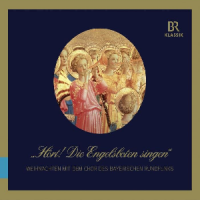 Hear! The angel messengers singing: Christmas with the Choir of the Bayerischer Rundfunk is a collection of mostly German carols with a smattering of other climes, including Burl Ives' arrangement of "O Little Town of Bethlehem," which is sung with a celestial reverence. Two Settings of "Es ist ein Ros entsprungen" are included, Michael Praetorius' original and that of Jan Sandström, the latter which is transformed by its elastic tempo and angelic re-harmonization. This is really exceptional with the choir pressing the score for the maximum emotional expression. Benjamin Britten's "A Hymn to the Virgin" is floating and ethereal, almost diaphanous. Hanns Miessner's arrangement of "Stille Nacht" is beautifully somber. The recording features oboist François Leleux, whose instrumental interjections add a lightness like air to shipped cream. The recording is to be listened to in its entirety, as a recital performance. It would be splendid holiday gathering music. I warmly recommend this holiday choral recording. Critic's Note: Anno Domini 2017, marks the 100th Anniversary of recorded jazz, deftly noted by the release of the Original Dixieland Jazz Band's shellac "Dixieland Jass Band One-Step (A)/Livery Stable Blues (B)," Victor 18255, recorded February 26, 1917 and released March 7, 1917. Just for perspective, in 1917, my father was 18 months old and my mother was yet to be born for two years. It is also the twentieth anniversary of me writing for All About Jazz. The first recording I reviewed for the magazine was Art Pepper's San Francisco Samba (Contemporary, 1997), published December 1, 1997. I am using this article as part of a series noting my twentieth anniversary with the magazine and paying special tribute to my fellow writers at All About Jazz and Publisher Michael Ricci.