By C. MICHAEL BAILEY
November 29, 2014
Sign in to view read count
As surely as the sun rises in the east and sets in the west, each October and November brings new editions to the Georg Frederic Handel Messiah catalog. This year is no exception with two fine period performances and one period performance from 2012 that was somehow previously missed and reissued in an abbreviated form. There is more information about Handel's masterpiece found in the previous articles: George Frederic Handel and His Messiah: The Perfect Holiday Collection and Christmas I -A Handel's Messiah Throw Down, 2013....

Handel's Messiah is no stranger to either conductor Harry Christophers or Boston's 200-year old Handel or Haydn Society, both artists, singularly and collectively having recorded the oratorio multiple times. Christophers recorded the piece with his The Sixteen in 1997 for Hyperion and then again in 2008 for his newly formed Coro Records. Both are sturdy and enduring performances, each reflecting the will of their conductor, each equally refined and deserving of praise. The Handel and Haydn Society provided a very fine Messiah arranged by Mozart in 2009, under the baton of Andrew Parrott for Arabesque Recordings. Since having taken over the helm at H&H Society, Christophers has made successful recordings of Handel's Concerti Grosso Ops. 3 & 6, Mozart's Requiem, the first volume of a Haydn symphony and concerto cycle and a collection of American Carols, Joy to the World: An American Christmas, all on Coro.

It is fitting that Christophers tune up the H&H Society for his Messiah as it is a practiced staple of the ensemble's repertoire. The H&H Society debuted Handel's famous oratorio on American soil on Christmas Day, 1818, and has performed it annually since. The present recording represents the thought that it is the direction of the ensemble and not the emsemble alone that impacts a given performance. Christophers favors a conservative, English approach to his Messiah and he makes an effort to achieve his sonic goals. His direction here is as convincing as his soloists and chorus, who collectively imbue the performance with as state of grace found lacking in many contemporary period-instrument accounts. This is as good as one could possible want of a Messiah Performance.

I think that it is safe to say the Emmanuelle Haim's Messiah is the first recorded with a woman conducting. Perhaps it is impolitic to point this out, save for the fact that this is on of the finest performances of Master Handel's oratorio since... Hogwood (1980), McCreesh (1997), Butt (2006), The Christophers? The distinction for Haim and her very fine Le Concert d'Astrée, and Choeur et Orchestre is the fresh preciseness of the reading. The performance is jarringly different from even its period instrument / performance sisters. Haim's account rings the bell of sonic and kinetic innovation of Handel's piece as hard among its contemporaries as did Hogwood's among the modern orchestra performances nearly 40 years ago.

The magazine Voix des Arts, in that publication's review makes several notable points in explaining Haim's success with Messiah. For the past 20 years, Haim has made a name as one of the most thorough studies of the period, from its beginnings in Monteverdi to its triumph Handel. Haim's French heritage is summoned as a provocative reason for her precise and startling performance of Messiah:

"[While] it can be argued that, despite the typically Baroque abundance of French dance rhythms in the music, Messiah is one of Handel's most English works. The influences of German models of Schütz, Pachelbel, and Bach and even the Italian works to which Händel was exposed in his youth are less noticeable in Messiah than those of Blow and Purcell, to whose large-scale choral works Messiah is an obvious successor. Under Maestra Haïm's direction, there is unmistakable emphasis on the French elements of Händel's musical architecture. "

This difference in national flavor is best illustrated and understood in another way in J.S. Bach's French Suites abundant with dance melody and kinetics, when compared with his English Suites with their stately grandeur and presence. All that said, last year saw the release of Messiah by the French unit La Chapelle Rhenane, under the direction of Benoit Haller. The two performances could not be more different, with Haller's account being more Romantically inclined while using more modest vocal forces.

The Voix des Arts article goes on to emphasize:

"Unlike many of her historically-informed colleagues, Maestra Haim seems to have no agenda other than performing the music in a way that would have been familiar to Handel. Articulations of cadences are occasionally rather abrupt, and the final bars of individual numbers are intermittently idiosyncratically handled. On the whole, though, Maestra Haim preserves an unusually consistent progression of tempi that sets an engaging but never breathless dramatic pace... ...Maestra Haim triumphs over some of the most celebrated of her colleagues by making this Messiah one that, almost without exception, sounds like a genuine performance of Handel's Messiah...

Haim has no deficiencies among soloist, al tuning in equally balanced and attended performances as Haim's consistent tempi and dynamics. This Messiah edges Christophers' current offering with its tart newness and daring invention. 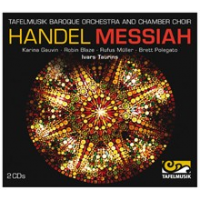 Tafelmusik may be the New World's finest period-instrument and practice ensemble. Based in Toronto and founded in 1979, the orchestra has been led by Musical Director Jeanne Lamon since 1981. The band and chorus specialize in the Baroque and Classical music periods and have surveyed the works of Vivaldi and Bach, as well as Telemann, Biber and Handel. The group is short only the last symphony of Beethoven's orchestral output (under the direction of Bruno Weil).

It is no surprise that the orchestra and chorus would take on Handel's masterpiece, only how long it took them to do so. Conducted by Tafelmusik's choir director Ivars Taurins, Tafelmusik's performance of Handel's Messiah is, at once, intelligent and measured. Globally, Taurins resists runaway tempos while retaining the period-performance spirit of brisk velocities. Additionally, the choral forces (as well as the orchestral ones) are abbreviated in keeping with historically-informed performance practices. The recording benefits from the more modern engineering methods used, making this version if not sonically warm, then, at least balmy. 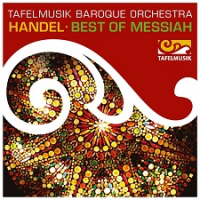 Outstanding among the soloists is countertenor Robin Blaze, who renders the showpiece "He Was Despised" creamy and rich. The famous "Hallelujah" chorus illustrates conductor Taurins' firm guiding of sonic dynamics. Volume modulations reveal the internal power of the selection in the voices of smaller forces. This is a smart and forceful account that stands up well among its period-performance peers. Tafelmusik Records releases a single disc The Best of Messiah recording that mines the full release. With the Christophers offering, these Messiahs represent a wealth of Handel this year.