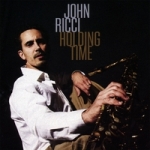 Saxophonist/educator John Ricci comes out swinging for his debut recording Holding Time. The Jacksonville University Professor of Jazz Studies combines original compositions and arrangements of standards for an intriguing set of mainstream jazz.

The relatively straight reading of "Here's That Rainy Day," done as a quasi-samba, has accessible leanings and features a stand-out solo by bassist Billy Thornton. Ricci's full sweep of his horn's range, emphasizing his extensive bop vocabulary, is impressive.

The bouncy title track swings with a deep pocket courtesy of Thornton and drummer Peter Miles. The hard-swinging momentum sets up inspired solo turns by Bowlus and Ricci. The haunting lyricism of "Slow Tango" contrasts nicely with the down and dirty blues of Ben Webster's "Bounce Blues," the session closer. The latter reveals the influence of not only the tune's composer, but of modern interpreters like Branford Marsalis.

Ricci is a convincing voice in the increasingly overcrowded world of jazz saxophone. His integrity and passion toward the advancement of his musical vision is evident throughout.