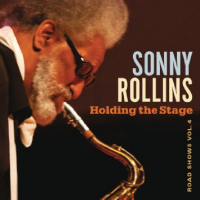 At this point in his long and storied career, tenor saxman Sonny Rollins is probably incapable of releasing genuinely bad music (which isn't as obvious a statement as it may seem if, for example, you've tried to listen to Bob Dylan's Shadows in the Night Sinatra homage). Still, some sets are better than others, and Sonny recorded live onstage, spontaneously captured in the improvisational moment, is about as good as Sonny gets. "Something about the interaction of human being to human being creates a tension, and I get more involved, which probably changes what I'm doing," Rollins confides in Ted Panken's liner notes. "I'm not conscious of it. But once I'm out there, those forces obtain."

Road Shows Vol. 4 spreads out seven tracks recorded across more than three decades (from 1979 to 2012). It opens with one of his favorite concert staples, a stately yet emotive rendition of Duke Ellington's classic "In a Sentimental Mood" (2007, London). Recorded during Rollins' September 15, 2001, Boston performance documented on Without a Song: The 9/11 Concert (2005, Milestone), the closing, 23-minute heretofore unreleased closing "Medley: Sweet Leilani, Solo, Don't Stop the Carnival" is not only this set's pinnacle but ranks among the best live recordings of the saxophonist's entire career. Bassist Bob Cranshaw and drummer Perry Wilson move "Sweet Leilani" like an alluring belly dancer or, thanks to Wilson's rimshots, a bump 'n' grind striptease artist, with Rollins digging down into his tenor's "growling range" to match its down and dirty-ness. Just like that, the band shuts down and Rollins erupts into more than five minutes of spontaneous improvisation, doubling back on the familiar melodies of "Sweet Leilani," "St. Thomas" and even "Pop Goes the Weasel." And then just like that (again), the band roars back to pick up the colorful threads of Rollins' traditional calypso closer "Don't Stop the Carnival," which genuinely sounds, thanks to the rhythm section plus percussionist Kimati Dinizulu, like Rollins' saxophone is leading a conga line as it dances through the boisterous streets of Rio.

Like a truly great meal, there's nothing but scrumptious and sumptuous delights in between your appetizer and dessert, especially when Rollins turns to honor some of his favorite colleagues. "H.S." (2006, Toulouse) suggests Horace Silver's jaunty, sing-able melodies and their crafty rhythmic underpinnings, especially when Cranshaw upshifts his walking bass line into a more strident gallop. "Disco Monk" (1979, Finland) is another highlight: Rarely performed since it appeared on Don't Ask (1979, Milestone), Rollins bends and refracts Thelonious Monk's inscrutable classic "Nutty" throughout his improvisations, while electric bassist Jerome Harris and drummer Al Foster keep churning the smooth disco rhythm into compact nuggets of jazz and funk. "We only played that for a while. Some material I played depended upon the musicians who were working with me," Rollins recalls. "I don't think I ever played 'Disco Monk' with another group."

"This album consists of various periods of my career, with something for everybody," Rollins reflects. "It's who I am, and the music represents just about every aspect of what I do."

"I hear my shortcomings when I listen back to myself, but I tried to find some that I wouldn't want to shoot myself after hearing."