By GLENN ASTARITA
December 23, 2010
Sign in to view read count 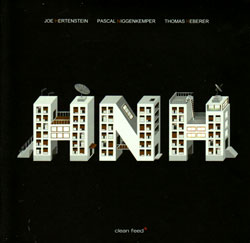 Three well-versed progressive jazz musicians from Germany, now calling New York City home, inject a starkness that uncannily transmutes into an upbeat program on HNH, the debut recording, led by drummer Joe Hertenstein. The differentiator here pertains to Thomas Heberer's use of the quarter-tone trumpet; by working with a horn that cuts a pitch halfway between notes in the chromatic scale, he executes an edgy and gruff overlay, linked with jazz-centric improvisation. Moreover, Hertenstein and bassist Pascal Niggenkemper paint a broad canvass, featuring slippery jazz grooves and a fertile bottom-end. It's a democratic engagement, indeed.

Heberer intersperses traces of Mediterranean folk music along with free-bop, atop the rhythm section's buoyant grooves, with the band apt to hint at melody to parlay a vibe open to interpretation. With the trio operating occasionally in stealth mode, the trumpeter turns up the heat in spots via gnawing, scratching notes and circular phrasings, soaring and dolling out emotively charged choruses to steer an exploratory soundscape on "Lucretia's Legacy/Do I Remember Wrong" that borders on restraint.

The musicians' collective output instills a shadowy glimmer to complement the rather persuasive and intricately developed story lines evidenced throughout HNH.

Screw The Pendulum; Glulan; Paul's Age; Doin' The DO; Prelude And Tomorrow's Problem; Lucretia's Legacy; Do I Remember Wrong; The Tolliver Toll.