By JAKOB BAEKGAARD
August 26, 2014
Sign in to view read count 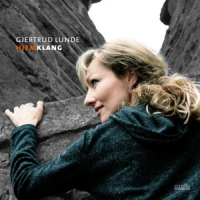 Music is a language that speaks in several tongues. This statement is taken quite literally on Norwegian songstress Gjertrud Lunde's album Hjemklang where she sings in her own native language, as well as English, Norwegian, French and Portuguese.

Each language is a new instrument for Lunde, a range of vocal possibilities, shades and accents, but the thing that binds it all together is a depth of feeling and delicacy. Hjemklang can loosely be translated as "the sound of home" and this is exactly what the album conjures: a safe haven of sound. As Lunde sings on "Going Home," a melody composed by the Czech composer Antonín Leopold Dvořák with words by William Arms Fischer, "No more fret nor pain / No more stumbling on the way / No more longing for the day / Going to roam no more."

Instead of roaming, there is room for gentle meditation as Lunde unfolds a luxurious soundscape with Florian Zenker's guitar and subtle electronics, Wolfert Brederode's melancholy piano and the percussive stardust from Bodek Janke. A special guest is trumpeter Arve Henriksen whose instantly recognizable tone, with its ambient touch, opens "Pilgrim" where Brederode's shimmering Fender Rhodes adds further atmosphere before the composition morphs into a chilled groove.

The music is enchanting and the accompaniment from the musicians fits Lunde's ethereal voice perfectly. She has truly found her own musical home with this sound and combination and the album is a siren song of balmy beauty that is hard to resist.