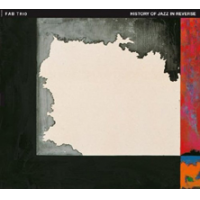 The air is full of a dark menace at the opening movements of Billy Bang's violin in "Homeward Bound," suggesting that music of overwhelming sadness will follow. However, all of this soon dissipates as bassist Joe Fonda and drummer Barry Altschul—and Bang as well—guide the music from turmoil and grave fear, loathing and gloom to the strains of brightness, hope and glory. The sense of catharsis at the end of the piece is palpable and portends well for the rest of History of Jazz in Reverse. This, then, is far from an album of doom and gloom, although Bang must always have been reminded of Vietnam and the war that ended up killing him, albeit during the time of peace. Bang reveals not just his mind but, in his emotionally charged playing, his heart and soul as well. His highly impressionistic style influenced everyone around him and it does here as well.

This music swings—not only in the rhythmic sense—but in a broader, more stylistic sense, cutting a wide swathe that is somewhere between romanticism and abstract impressionism. There is much use of whole-tone scales, and going beyond this, modality. Moreover, the glorious timbres of the violin reign supreme, as do that of the shape-shifting bass and drums. But it is the glimmering sound of the violin that crowns the magisterium of an enriched timber spot and this, in turn, gives new meaning to the melodicism of the music, through sensual motifs that make for enriched harmonization. The musicians, not only on that opening track, but elsewhere on "Implications" and "From Here to There," suggest veering towards feelings, and this they express in the subtlety of a myriad of hues that dapple the musical topography of the album. This is what makes the music glow and shimmer with a bright flame, rather than swing with abandon. Perhaps it is in the passion that begets jazz; the paying of dues and in what music has been to bring forth the music that History of Jazz in Reverse is all about. There is, indeed, a lot that goes on in a musician's soul for him to play—not only with aching emotion, but also to suggest this to the soul of the listener as well.

Yet all is not ponderous on this album. The dedicatory ballad "For Bea" is beautiful and thoughtful. "One for Don Cherry" also captures the intellect and the sharp mind of the pocket trumpeter, who also strove for depth of emotion rather than grand figures in his sound and thus the chart, is lyrical and thought-provoking. And then there is the ever puckish ramble of "From Here to There," where Bang, Fonda and Altschul fly wildly in the face of convention. "Chan Chan"—that classic chart by Compay Segundo, who enlivened the Buena Vista Social Club in Havana Cuba—is played as directed: con alma, with soul. And so, also, is the taste of "From the Waters of New Orleans" linked to jazz: a life-giving music.

Homeward Bound; Implications; For Bea; From Here to There; Chan Chan; History of Jazz In Reverse; One for Don Cherry; From the Waters of New Orleans.