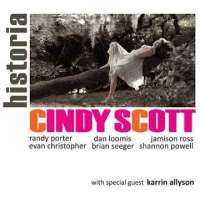 Stating the obvious right off, vocalist Cindy Scott is from New Orleans. This fact thoroughly and three-dimensionally informs the twelve selections on Historia, Scott's follow-up to Let The Devil Take Tomorrow (Catahoula Records, 2009), without making a burden of it. In subtle and not-so-subtle ways, the aural aroma of the Crescent City appears like an essence, that hyperdistillation that leaves neither finger nor footprint but exists as an indelible mark on the music readily recognised. This mark is made audible immediately in Scott's arrangement (with her lyrics) of the Gillespie/Parker shot- over-the-bow, "Shaw 'Nuff." Looking at that title makes it all too easy to expect an Eddie Jefferson or even Bob Dorough sliced bebop.

What curls from the speakers is something else altogether. A French- Quarter- Sunday-Afternoon march is established by drummer Jamison Ross and perpetuated by pianist Randy Porter channelling Professor Longhair. Guitarist Brian Seeger reaches down deep into the blues and shows where Bo Diddley came from. Scott sings of taking chances to learn, stretching beyond one's conception into that next creative place. Scott makes breezy "No Greater Love," pulling the piece from the dusty silver service of standards. She blow the soot off the classic, polishing it to a high and complex Creole sheen. Porter plays a eutection of impressionistic stride and Antoine Domino- left hand magic against Ross' shimmering cymbals and Scotts wordless song.

On the nominal title cut, "Historia de un Amor," Scott waxes darkly over an earth-pulse played by bassist Daniel Loomis. Seeger seasons the piece with electric guitar cries in the extended introduction and then when Scott gets her Spanish on, leading up to Seeger's craggy and urgent solo, overdriven and cutting. Scott picks up and completes this urgent ache, completing the piece as a humid Caribbean tone poem. Scott penned the English lyrics. The original "It's Gonna Be Okay" ia a cross-over dream, a song of certain hope that would be as at home in the modern country realm as it is here, full of Louisiana and sunshine.

"Look at the Silver Lining" and "Shenandoah" are so completely transformed they become a celebration of all that jazz is in its absolute exegesis. In both songs, Scott winds up and throws a wicked curve ball. The former is taken up-tempo and is perhaps the most "jazzy" of all of the selections. The latter is made even more pastoral than the original by its slower tempo amid bass harmonics and Scott's rich flute playing. Scott duets with Karrin Allyson on "Some of that Sunshine" providing an upbeat and inclusive end to a very fine recording indeed.

Shaw ‘Nuff; There is No Greater Love; What’s Comin’ Atcha; Historia de un Amor; It’s Gonna Be Okay; Turnaround; Look for the Silver Lining; Laura Lee; Shenandoah; I Concentrate on You; Silence of the Stars (O Silêncio das Estrelas); Some of that Sunshine.