By KARL ACKERMANN
November 25, 2018
Sign in to view read count 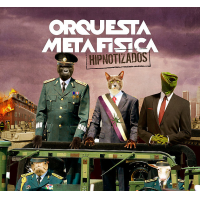 Argentinian Sebastian Volco is an avant-garde composer, pianist, guitarist, and electronics player with wildly eclectic tastes that course through the dance culture of his country to alternative rock, jazz, and beyond. He has recorded as a solo artist, in a duo formation and up through a variety of ensembles. He has led or co-led on more than a dozen releases and Hipnotizados is the second from his ensemble Orquesta Metafisicia. Like the small orchestra's previous release 7 Movimientos (Omrecords, 2011), this is a concept project, but dark in nature.

To set the stage, Hipnotizados is a socio-political album that leaves no doubt about intent. The title ("Hypnotized" in English) refers to the impact—good and bad—of communications in the hands of those with disproportionate power, those who would manipulate with their words. Interlaced with the music are readings and audio samples from defense contractor Lockheed Martin and political demagogues such as Mussolini. The messaging from modern political figures includes Tunisian "President for Life" Habib Bourguiba, who reigned when food riots took more than a hundred lives, a self-congratulatory Kim Jong Un, and Donald Trump's call for a Muslim ban. The diaspora doesn't completely eradicate optimism; it gives us a pope preaching love, Francois Hollande speaking of unity in the face of terrorism in France, and George W. Bush doing the same in the wake of 9/11.

Beyond the politically-charged concept of this album, there's high drama in the music itself. It is genre-free composing but its elements are many. Think of the exotic psychedelic dub jazz of Club d'Elf meeting the art rock of early Genesis. Add in touches of modern tango, groove, and rock, mixed with classical embellishments. Footsteps reverberate in an otherwise empty hallway as "Anesthesia" opens the album. The violins add to the sense of isolation and, once in place, the layers of piano and bandoneon that join in, do not break the spell. Imperceptibly, the pace quickens and morphs into the danceable "Amnesia," a brief transition piece that turns melancholy as a lead-in to "Bastardos Coesmicos" (Cosmic Bastards), a partially narrated brush with terrorism. In a different vein "Hiromy" (for Japanese jazz pianist Hiromi Uehara) has a bubbly pop feel and serves as a misdirection from the serious-minded—but strangely funky—"Estrujamientos," where despots preach the virtues of state control above self-determination. The initially tranquil "Los Ojos" has a cautionary undertone as it builds in intensity, opening to the disturbing "divide-and-conquer" theme from ancient Greece to 2018 America. Hipnotizados ends in a swirl of psychosis with "Elevación Primaria," the reproachful words of the Soviet ruler Vladimir Lenin setting up the churning cacophony.

Orquesta Metafisicia often performs live with singers on stilts and visual artists painting around them, à la Darcy James Argue's Brooklyn Babylon (New Amsterdam, 2013). In a pared-down presentation, the studio recording of Hipnotizados supplies a twenty-six-page collection of passages and artwork that help bring the project to life. The peripheral material, however, is not a necessity. The musical content is a remarkable work of explosive curiosity, danceable at times, but it's not a party; it's a Ghost Dance. Sebastian Volco has produced imaginative music with a great sense of purpose and it shouldn't be missed.