By JIM SANTELLA
October 1, 1999
Sign in to view read count 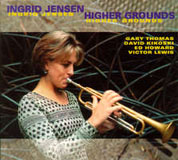 Trumpeter Ingrid Jensen was finishing up at the Berklee College of Music in Boston at about the same time Art Blakey left us. His music lives on, of course, and Jensen is one of the benefactors. Now over thirty, the trumpeter is an exponent of the high regard for round tone quality espoused by Woody Shaw, Miles Davis, Clifford Brown, and others. Surprisingly few trumpeters respect tone quality as much as this select group. Her third album as a leader sweeps up the kind of Jazz Messengers atmosphere with which Wynton Marsalis started his jazz career. Her quintet smokes with hard bop motion and seethes with an early '70s Fender Rhodes sound like that which Miles Davis employed to contribute to the development of "fusion." Now based in New York, Jensen was Professor of Jazz Trumpet and Big Band at Austria's Bruckner Conservatory when she was twenty-five. Later, touring with Lionel Hampton and his Golden Men of Jazz and appearing with Diva (No Man's Band), Jensen has paid her dues and joined the ranks of today's mainstream leaders.