By SANDY INGHAM
December 14, 2005
Sign in to view read count 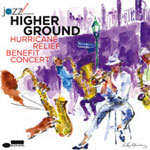 An extraordinary hurricane benefit concert took place at Jazz at Lincoln Center in New York on September 17, just two weeks after Katrina washed away much of New Orleans. The five-hour show brought together a dazzling array of jazz and pop stars, and notables from stage and screen who recited tributes to the birthplace of jazz and urged Americans to give generously and to make sure their government fixes the levees and helps the city revive.

"Higher Ground'' was broadcast on public TV and radio, and now Blue Note Records has issued a CD of highlights, with proceeds going to New Orleans musicians and related causes. There's much to love on this record. Diana Krall's sultry "Basin Street Blues"; Dianne Reeves' uplifting "The House I Live In,'' an anthem about the best of America; Marcus Roberts' playing on Jelly Roll Morton's "New Orleans Blues,'' which opens playfully, then builds to a walloping finale; and Cassandra Wilson's majestic rendition of "Come Sunday.''

The emotional peaks, though, were scaled by the Crescent City's own. Terence Blanchard on a stately ballad, [email protected] artistic director Wynton Marsalis leading a septet on a classically New Orleans stomp, "Dippermouth Blues';' Aaron and Art Neville digging into a deep funk bag on "Go to the Mardi Gras,'' with drummer Herlin Riley shakin' everybody's booties; and the multitalented Jordan family summing up the bittersweet reality of their city's plight on "Here's to Life.''

The most riveting performance was by trumpeter Irvin Mayfield, who dedicated "Just a Closer Walk With Thee'' to his father, Irvin Sr., who was missing at that time and whose death by drowning has since been confirmed. Mayfield, leader of the brilliant New Orleans Jazz Orchestra and the city's official cultural ambassador, played the somber hymn with grace, but imbued it with pain, and even rage, over what he and so many others had suffered.

This Joy; Over There; Go to the Mardi Gras; Basin Street Blues; Never Die Young; The House I Live In; New Orleans Blues; I Think it's Going to Rain Today; Dippermouth Blues; I'm Gonna Love You Anyway; Is That All There Is?; Just a Closer Walk With Thee; Here's to Life; Blackwell's Message; Come Sunday.