By JIM SANTELLA
February 18, 2009
Sign in to view read count 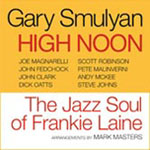 This tribute album by baritone saxophonist Gary Smulyan features his bebop-based nonet pulling inspiration from a 1956 album by pop singer Frankie Laine (1913-2007) and trumpeter Buck Clayton. As Laine's foray into jazz's '50s mainstream, Jazz Spectacular (Columbia) represented a piece of the singer's repertoire not as well-known as his pop music. It allowed him to interact with instrumentalists of the era who represented jazz authority and had little to do with themes such as "High Noon," "Mule Train," "Cool Water," "Rawhide," "Gunfight at the O.K. Corral" and the more recent "Blazing Saddles" and "3:10 to Yuma." Laine did not sing on the soundtrack for High Noon, but did record it as another of his Western-based hits.

On Smulyan's album, "High Noon" is hardly recognizable. While the ten songs come from a broad spectrum of Laine's career, each has been rearranged by Mark Masters to fit a nonet akin to that found on Miles Davis' The Birth of the Cool (Capitol, 1949), with similar instrumentation, a pervading blues quality and soulful soloing. Here, "High Noon"'s theme dances in and out of dense harmony and "gunfight" choruses traded between French horn and trombone, and alto sax and trumpet. On bass clarinet, Scott Robinson's lengthy intro clears the main street of town while Smulyan closes the piece with one big booming chorus after another.

Laine wrote the lyrics for "A Man Ain't Supposed to Cry," "Torchin'" and "We'll Be Together Again," all which come with heavy blues overtones. Smulyan's horn sings like the original, his nonet providing plenty of jazz atmosphere, affixing a balance to the eclectic quality of Laine's emotional Italian-American crooning melded with whiplash cowboy stories.

I'd Give My Life; High Noon; Torchin'; It Only Happens Once; Baby, Baby All the Time; When You're in Love; Put Yourself in My Place, Baby; A Man Ain't Suppose to Cry; That Lucky Old Sun; We'll Be Together Again.