By JAY DESHPANDE
January 15, 2009
Sign in to view read count 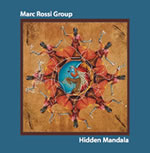 Although the categories of jazz and world music frequently intersect, the results are a mixed bag. It's no small task to meld together different ethnic musics without doing them some disservice. However, pianist and composer Marc Rossi brings something new and exciting to the field. On Hidden Mandala, Rossi's songs capture the rich possibilities of classical Indian music, but still stay true to their jazz roots.

This hybrid is made possible by Rossi's comfort in multiple genres. A graduate of the New England Conservatory and long-time composer in the fields of jazz and contemporary classical, Rossi has also been for many years an earnest student of North and South Indian musical traditions. Yet Rossi's playing remains firmly jazz-oriented. Consequently, the tunes on Hidden Mandala most often function as lucid jazz compositions: head and solos are demarcated by evident western harmony and vamp figures, even as the imminent possibilities of Indian forms let the soloists branch out and probe the songs in innovative ways.

Take for instance the opening track, "Blues for Frank and Geetha," which features the Indian Carnatic vocals of Geetha Bennett over a standard blues progression, followed by a 24-bar bridge. Rossi anchors the blues with a low-register figure in open fifths, at once giving the song a gutsy rootedness and the harmonic freedom to float out of western conventions. And so it does: after a couple bluesy choruses, saxophonist Lance Van Lenten takes off, calling upon Coltrane in a spirited solo.

All the songs admit a similarly global context. The graceful "Fatwa in Carbondale" broadens after two minutes through an unforeseen shift into an Afro-Cuban feel, propelling the tune in exciting directions. The musicians on Hidden Mandala are no less diverse. The inclusion of South Asian guitarist Prasanna on "Bittersweet Five" adds both a Metheny-like timbre and a singing quality of improvisation that again recalls classical Indian vocal melodies. All the while, Rossi's accompanying keyboard harmonies keep the song grounded in jazz, even as the improvisations speak to limitless possibilities.

Herein lies the strength of Rossi's compositions: his pieces are platforms, providing his players with great potential for ascent, just as he keeps a firm hold on the harmonic foundations. The "mandala," a visual art form used in Buddhist and Hindu meditation, concentrates one's spirit and focus while giving vision on a grander scale. Rossi's musical inventions perform this same feat admirably, providing a broader scope that encompasses jazz and South Asian forms.