By SAMUEL CHELL
September 3, 2007
Sign in to view read count 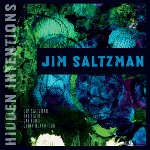 Jim Saltzman is another gifted, pyrotechnical tenor player out of the Coltrane-Brecker school, one who, based on the evidence of this striking debut recording and all-original program, bears close watching. When he backs off on his sound, he displays an appealing, warm middle register, but for the most part the emphasis here is on high-energy, intense playing. Saltzman shows impressive control of harmonics, occasionally employing multiphonics, and his command of the altissimo register would likely give some alto players an identity crisis. On soprano he gets a full, smooth sound, equal parts Steve Lacy and Bob Wilbur, while maintaining a Coltrane harmonic-melodic sensibility. His use of bansuri and Native American flutes is largely textural, making for an incongruous yet undeniably compelling mix when complemented by Fender Rhodes piano.

The tunes are, for the most part, "harmony driven"—modal constructions, numerous suspended and augmented chords, and unpredictable chord changes that would no doubt prove problematic for lesser improvisers. Although none of the ensuing melodies matches the opening title track, it's primarily the facility of Saltzman, as well as pianist Pat Firth, in navigating these potential harmonic obstacle courses that holds the listener's interest. Firth, in addition to contributing fluid lines that build on the leader's ideas, extracts a personal, sustained sound from the Rhodes—similar to the sonorities produced by phase shifters for background effect but, in this instance, configured to serve as an expressive solo voice as well as enhance the ensemble sound.

Although the musicians are sufficiently skilled to play challenging compositions freely, the music on this disc is a far cry from "free" jazz. In addition to chords the group plays "time"—more symmetrical than polyrhythmical, more drive than swing, or a settled groove, but nonetheless an energetic and unrelenting pulse. Drummer Quinn Blandford inspires and sets up the soloists, then helps shape the development of individual solos while maintaining the momentum with a mix of rock-inflected back-beats, implied subdivisions of the primary pulse, and occasional straight-ahead 4/4 swing (though the clap of the hi-hat on the offbeats is hard to pick up).

Bassist Jay Foote completes a strong rhythm section, serving primarily as an unselfish player responsive to the quick change-ups in rhythm and harmony while offering the two principal soloists firm ground to stand on at any speed. He solos judiciously, favoring the upper-register in a manner that assures clearly defined pitches.

How much of an audience there is for music as venturesome as this remains to be seen. No doubt some listeners would have wished for the inclusion of several standards in the program. On the other hand, with a player as attentive to detail as Saltzman, what might initially seem like unfamiliar ground can suddenly appear more like home. Take the less-trodden path of the opening track ("Hidden Intentions"), stay the course through "Going Home," and withhold judgment until the finale—"Once Faded, Now Focused." As Homer's Odysseus discovered, the greatest adventures are also homecomings.

Hidden Intentions; He Can