By STUART BROOMER
February 17, 2009
Sign in to view read count 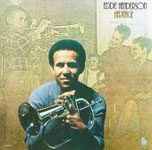 Trumpeter Eddie Henderson has been moving in and out of jazz since the '60s, combining parallel careers as a musician and psychiatrist. In that time he's applied his strongly lyrical playing to both acoustic post-bop and fusion settings, but his greatest celebrity has definitely come from his credits on the electric side. In the early '70s he was a charter member of the Herbie Hancock sextet that recorded Mwandishi (Warner Bros., 1970) and that fusion of horns and funk rhythms would shape some of Henderson's most successful recordings.

Heritage is close to the Hancock fold. Recorded in 1976, it includes trombonist Julian Priester, Henderson's band mate from the sextet, while the rhythm section of bassist Paul Jackson and drummer Mike Clark was drawn from Hancock's contemporaneous Head Hunters. There's a definite Miles influence at work in Henderson's trumpet, a taste for few notes placed for maximum dramatic impact, but what ultimately shapes this music is Henderson's vision of jazz-funk as a community enterprise, a dynamic and democratic mix of the whole band and its available technologies. Jackson's popping, bending electric bass, for instance, is frequently prominent, as far up in the mix as the soloing horn, while there's usually an intense polyrhythmic dialogue going on between Jackson, Clark, conga drummer Mtume and Patrice Rushen, who provides bubbling electric keyboards in advance of her own success in R&B.

Each of the horns is willing to improvise within that rhythmic dialogue, and reed player Hadley Caliman is as apt to be assigned a structuring ostinato as Jackson or Rushen, and there are moments when Henderson will play a drum part on his trumpet. The original LP has provided samples for several hip hop records (including Jay-Z's Coming of Age), but it definitely deserves to be heard on its own terms as one of jazz-funk's most creative moments.