By EDWARD BLANCO
February 4, 2014
Sign in to view read count 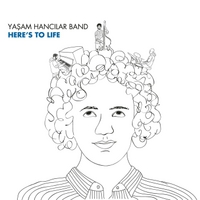 A singer from Istanbul, Turkey and student in the Jazz Vocal Department of the Amsterdam Conservatory, Yasam Hancilar realizes a dream with Here's To Life, his self-produced debut album as leader fronting an acoustic quartet of young, up and coming players. A passionate jazz enthusiast who favors the mainstream, straight ahead sound, Hancilar reprises the music of such icons as Irving Berlin, Cy Coleman, Oliver Nelson and Antonio Carlos Jobim among others, in compiling a repertoire of eight familiar standards and a couple of Brazilian favorites forging a compelling musical statement from a rising young vocalist with a determination to break out and carve a place in today's jazz landscape.

Beginning with Berlin's immortal "How Deep Is the Ocean," the well-known lyrics take on new life as Hancilar's slight accented vocals caress the song and improvise the music with some well-placed scatting to deliver an excellent rendition. A standout soloist on the tune is German-born pianist Christian Pabst, as is Colombian drummer Mauricio Ramirez, who provides stern stick work on the following "The Best Is Yet to Come." Perhaps the softest touch of the album comes on a beautiful rendition of "A Child Is Born," where the leader delivers one of his warmest performances. The first Brazilian number is surely a telling one, since Djavan's "E Que Deus Ajude"—voiced in Portuguese—is the story of a young man who gives it all up for a life in music, something Hancilar can identify with.

The great Leon Russell would be impressed with the band's version of his iconic "This Masquerade," while the Burke & Van Heusen standard "It Could Happen To You" features Italian bassist Marco Zenini in a pronounced role, rounding out the international flavor of the band. On Tom Jobim's spicy "Falando De Amor" Zenini opens the track with Hancilar once again engaging the music in Portuguese for another delicious taste of Brazil. Though starting out slowly, "Stolen Moments" and the oft-recorded "Just Friends" are two of the more upbeat sprite songs on the disc.

The album closes on the title tune, where the singer embraces the lyrics with a measure of emotion considering the direct reference to his own name (Yasam) which, just happens to mean 'life' in Turkish. It seems, by the selection of the music that Yasam Hancilar meant for his musical dream to be a kind of reflection on his own personal journey. If so, this may just have been the perfect vehicle to that end. Voiced with elegance and a touch of class, Here's To Life is an inspiring, intimate musical portrait from a remarkable new singer with a taste for the standards, well done.

How Deep Is The Ocean; The Best Is Yet To Come; A Child Is Born - Dedicated to Tobias; E Que Deus Ajude; This Masquerade; It Could Happen To You; Stolen Moments; Falando De Amor; Just Friends; Here's To Life.