Libby York: Here With You

By SUZANNE LORGE
April 8, 2008
Sign in to view read count 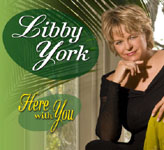 Libby York has the rich, rounded kind of voice that evokes another time—a time when it was Rosemary (not George) and there were only two kinds of martini (gin or vodka). York's new CD, Here With You, covers traditional territory with a surety that gives the material renewed relevance: York feels the swing or the bossa in each moment rather than merely imitating the singers to whom she owes her style. And this presence is what sets her apart.

On the CD York presents eleven standards with expert arrangements by Howard Alden. She opens with the chestnut "I Love Being Here With You," singing through the form once with the bass (Jon Burr) before the rest of the band enters—Alden on guitar, Vanderlei Pereira on drums/percussion and Warren Vache on cornet. Throughout the CD this keen band displays some industrious soloing, especially Vach's inspired takes on the calypso version of "Look For The Silver Lining" and on the slow bossa "The Day The World Stopped Turning." Vache also shares a vocal duet with York on "Walkin' My Baby Back Home," a bouncy ditty from the '30s whose naively romantic lyrics get a shot of the bawdy from the banter between Vache and York during the outro.

York recapped almost all of the tunes from the new CD at a launch concert at The Metropolitan Room on Mar. 14th. Adam Gopnick, the New Yorker writer who contributed liner notes to the album, introduced the singer and her band, with Tardo Hammer (piano), Todd Coolman (bass), Greg Sergo (drums) and Vache. Even live Vache never misses, whether he's playing a heartache of a solo on a ballad like "But Beautiful" or the dynamically punctuated phrases of the moderato Latin tune "Flamingo."

In mid-set York brought guitarist Russell Malone up to the bandstand to reprise his guest work from the CD—a too-short, just-sweet-enough rendition of their duet "For All We Know," the blues number "Azure Te" and "A Beautiful Friendship." "You see why I'm a happy girl tonight," York said after she and Malone finished the first tune. The audience was happy, too—Malone is a gifted accompanist with an ear for the lyrics, an intuition about a singer's phrasing and a clear, emotive delivery when he solos.

York deserves nothing less. She approaches each song with a restraint and elegance that is rare among singers, offering just enough to carry the musical idea and nothing more. Her performance strikes at what is essential in the material—the lyrics, the melody and the connection with the band. And York handles each like a master.

I Love Being Here With You; The Day The World Stopped Turning; For All We Know; Walkin' My Baby Back Home; You Go To My Head; A Beautiful Friendship; But Beautiful; Azure Te (Paris Blues); Look For The Silver Lining; The Things We Did Last Summer; Flamingo.

Title: Here With You | Year Released: 2008 | Record Label: Self Produced