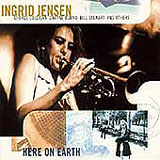 In recent times trumpeter Ingrid Jensen has been voted by Down Beat as one of the "25 most important musicians of the future." These kudos are based in no small part on a small but growing body of work that shows her to be a performer of remarkable depth. Now Canadian label Justin Time, recently associated with the German Enja label, has seen fit to reissue her second recording as a leader. Here on Earth , from 1996, shows a relatively nascent Jensen on a contemporary set of post bop that demonstrates a breadth of style already well on the way to becoming fully-formed.

The press kit cites Miles Davis, Art Farmer and Woody Shaw as influences; another unmentioned and obvious source is Kenny Wheeler. Like Wheeler she has a strong lyrical sense, coupled with formidable technique that sees her occasional reaching into the stratosphere, but regardless of her range she maintains a warm and lush tone throughout.

Opening with "Shiva's Dance," a modal romp by pianist George Colligan, who was also just beginning to emerge on the scene at the time of this recording, Jensen takes no time in establishing her credentials in a fiery opening salvo with drummer Bill Stewart, who displays his usual uncanny empathy throughout the session. Here and on her own "Woodcarvings" Jensen's roots in Shaw are evident.

The title track, another Colligan composition, is a waltz-time piece that has some of the melancholy of Wheeler, and it is a strong vehicle for saxophonist Gary Bartz, who guests on four tracks and whose history with Shaw must have held some reverence for Jensen. On the rarely-covered Miles Davis/Gil Evans piece "The Time of the Barracudas," bassist Dwayne Burno opens with a pensive solo that does little to foretell the track's relaxed swing which, with Colligan on electric piano, harkens to Miles' transitional period of Filles de Kilimanjaro.

On an album of high points the two weak spots are when vocalist Jill Seifers steps up to the microphone. With "Consolation," a Kenny Wheeler piece that originally featured the inimitable Norma Winstone on vocals, comparisons are inevitable. Winstone always brings a unique harmonic and phonetic language to her improvisations; sadly, Seifers, with a thinner voice and more conventional delivery, does little to distinguish herself. And that's too bad; the rest of the group delivers a tender reading, with Jensen comfortably navigating the high notes and delivering a poignant solo.

While Jensen's style is distinctive, and she is a capable leader who surrounds herself with performers who understand the importance of interplay, one walks away from Here on Earth feeling that there is more to be seen, that she has yet to deliver a definitive statement; subsequent releases continue to harbour that impression. But there is little doubt that Jensen has it in her, and Here on Earth is a good place to start to appreciate her potential.

Visit Ingrid Jensen and Justin Time on the web.

Shiva's Dance; Woodcarvings; Here on Earth; Time Remembered; You Do Something to Me; The Time of the Barracudas; Ninety-One; Consolation; Fallin'; Avila and Tequila