Junji Delfino: Here I Am 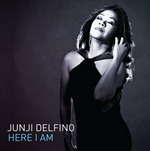 Despite singing jazz for thirty years, Here I Am is Junji Delfino's first solo recording. Delfino has notable jazz pedigree: her father, Bert Delfino, was a leading jazz figure in post World War II Manila, playing drums in a trio with pianist Fred Robles—who founded the Musicians' Guild in the Philippines—and bassist Rudy Adriano, in the clubs along Dewey Boulevard. Delfino's husband, David Gomes—a respected pianist in his own right—co-wrote two tunes and plays piano, and son Paulo contributed a song. Most of the tracks are jazz standards, and reflect the music Delfino grew up with in the Philippines and, later, in Malaysia. Delfino doesn't try to reinvent the wheel —though her arrangement of "Chega de Suadades" is original—but the strength of her voice, and its rich, mature tenor quality dominate all the songs presented here.

Paul Simon's "The 59th St. Bridge Song (Feeling Groovy)" gets things off to a gently swinging start. Delfino slows this feel-good number right down, drawing the words out. Bassist Pornchart Viriyapark and drummer Chanutr Techatana-nan lift the intro's laidback groove to a more buoyant swing by the end, and both Gomes and saxophonist David Muehsam lay down short but attractive solos. Anyone who has seen Delfino in concert will know what an outstanding scat singer she is, so her scat, which begins just as the song is fading, is something of a tease. On "Just in Time"—a minor hit for Tony Bennett over half a century ago—Delfino delivers a meatier scat improvisation in her very personal style.

Brazilian inspiration colors nearly half the songs. Delfino tackles two Antonio Carlos Jobim numbers: "Desafinado"; and a swinging "Chega de Suadades," which underlines the vocalist's adventurous spirit. Delfino's own "You and Me and the Bossa Nova" and Kurt Weil's bossa-tinged "Lost in the Stars" complete the Brazilian fiesta. On the latter, Gomes' notes tumble like the falling stars of the lyrics, and Muehsam's velvety sax sounds almost inevitably Stan Getz-like.

Delfino's voice is particularly impressive on Levant and Heyman's "Blame it on My Youth." With Muehsam's breathy sax evoking Ben Webster, Delfino delivers a heartfelt, poignant performance. The deep strength of her voice rings out on "You Don't Know What Love Is," and her sassy and swinging blues delivery recalls Ella Fitzgerald. The timeless swing of "It's Alright," and the romantic ballad "Here I Am"—both co-written with husband Gomes—sit well with the standards, and son Paulo Delfino's lovely "Little Things" is notable for Junji's sultry vocals and some fine playing from Gomes and Muehsam. This song impresses, as much lyrically as for its irresistible swing, and has the air of a jazz classic.

Junji Delfino may not be the most famous jazz singer in the world, but possesses the sort of convincing tone, keen sense of rhythm and sexiness in her voice of which the Diana Kralls and Jane Monheits can only dream. Of course, they've known this in Kuala Lumpar for years.

The 59th St. Bridge Song (Feeling Groovy); It's Alright; Lost in the Stars; Blame it on My Youth; Little Things; Desafinado (Slightly Out of Tune); Just in Time; You Don't Know What Love Is; Chega de Suadade (No More Blues); You and Me and the Bossa Nova: This is All I Ask; Here I Am.