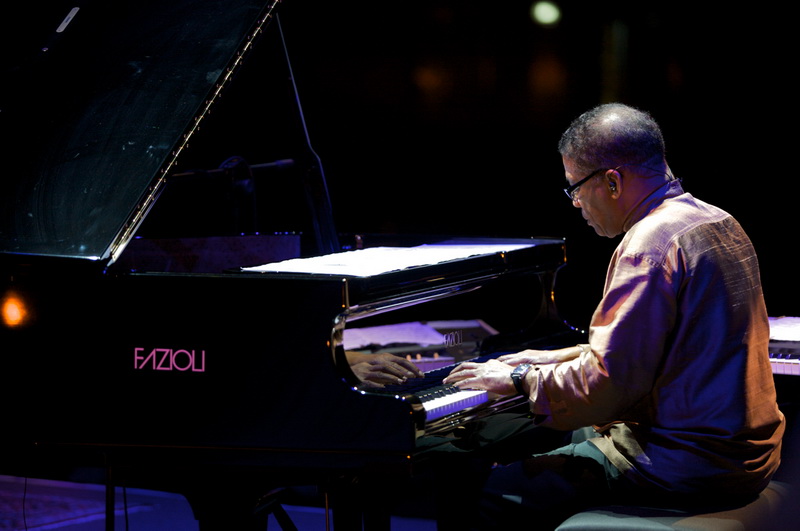 Herbie Hancock is—like the title of one of his most celebrated tunes—a chameleon, and the audience at a near-packed Royal Paragon Hall was reminded of just how many changes Hancock has stylishly wrung over the last fifty years. There were touches of his more impressionistic Blue Note recordings of the '60s, and the modal jazz purveyed by trumpeter Miles Davis's second great quintet, of which Hancock was a pivotal member for six years; heavy doses of funk grooves were a throwback to the barnstorming '70s, when Hancock carved out his jazz-fusion legend; a few twists and tweaks of knobs served as a reminder of his highly successful '80s foray into electronic dance grooves; and the set's vocal numbers represented the more mainstream jazz/pop vein that Hancock has successfully mined in recent years.

Hancock led a stripped down ensemble with bassist James Genus, drummer Trevor Lawrence, and, on half the tracks, vocalist Kristina Train. The set was essentially a greatest hits show—perhaps unsurprisingly, as this was Hancock's first time performing in the Kingdom of Thailand—plus a few tracks from the pianist's logistically ambitious Imagine Project (Herbie Hancock Music, 2010). The unifying thread, however, was Hancock-and-band's energetic, grooving delivery, and a refined, accessible melodic approach. The opening 15-minute salvo was an incendiary trio statement, with Hancock playing a highly percussive role, chopping and pounding the piano keys in between cameos of slashing synthesizer, while Lawrence and Genus provided powerful rhythmic support. At the end, Hancock was blowing and shaking his hands in mock fatigue, though there was probably an element of truth when he joked with the crowd: "That was not easy."

Hancock displayed extreme delicacy on the classically veined piano introduction to John Lennon's "Imagine," the first showcase for the considerably talented Train. The singer from Georgia brought her own personality to the song, like a more powerful, sassier Norah Jones, and was joined by the recorded voice of Omou Sangare as the tempo picked up. Hancock's use of the hard drive, to bring the collaborators from the Imagine Project into the show, was in keeping with a musician who has always been quick to adapt the technologies of the day; as he reminded anyone who expected Hancock circa Takin' Off (Blue Note, 1962): "This is 2011." Thus it was, that the driving vocals and guitar of Malian group Tinariwen accompanied Hancock's deep funk keyboard lines and Genus equally grooving bass on "Tamatant Tilay/Exodus."

In spite of six sound engineers working on the show— four Thais and two of Hancock's own—the bass sound was muddy, and it required concentration to follow Genus's lines. Nevertheless, Genus was impressive throughout the set, and even when taking the lead he always served the music first. The occasional use of pedals brought a sharper guitar-like sound to the bass, somewhere between the melodic lines of bassist Jimmy Haslip and the bop-oriented contours of guitarist Pat Metheny. The head-to-head between Genus and Hancock on a thoroughly reworked "Watermelon Man" was exhilarating, though Hancock's Keytar looked like a long-forgotten Christmas toy from '83. Hancock will probably play this crowd-pleasing number until the end of his days, though the near 20-minute fat-funk version here dragged on a bit too long.

Pleasing contrast was provided by "Court and Spark," with Train moodily inhabiting Joni Mitchell's lyrics. The softly padding rhythm section and Hancock's ever-personal, impressionistic brushstrokes brought a dark minimalism to the piece. Sound problems left both Hancock and Train without amplification for more than a minute, though this detracted only slightly from a hypnotic performance. Once the lyrics had faded, Hancock ventured into a delightfully slow-paced improvisation, a kind of extended coda to the song. The comforting melancholy of his explorations owed as much to Mitchell's blues as they did to European classical minimalism. At twenty minutes, Train entered on gently lyrical violin, the rhythm section joined, and the quartet visited "Round Midnight." The theme stated, Train left the stage, whereupon the trio raised the temperature and then some, in a heady exchange, with Lawrence's tumultuous drumming matched by Hancock's percussive jangling and hammered block chords

A riveting thirty minutes came to an end when the jam dissolved into "Canteloupe Island." This was more a vehicle for further exciting trio improvisation featuring Lawrence, rather than a faithful rendition of another of Herbie's "hits." At one point, one of Lawrence's standing cymbals fell from his drum platform, no doubt caught in the drummer's avalanche of rolls and crashing cymbals, but even the resulting crash sounded spot on. The exclamatory finale signaled the first pause in forty minutes since the beginning of "Court and Spark," but the enthusiastic applause was proof that nobody was complaining. 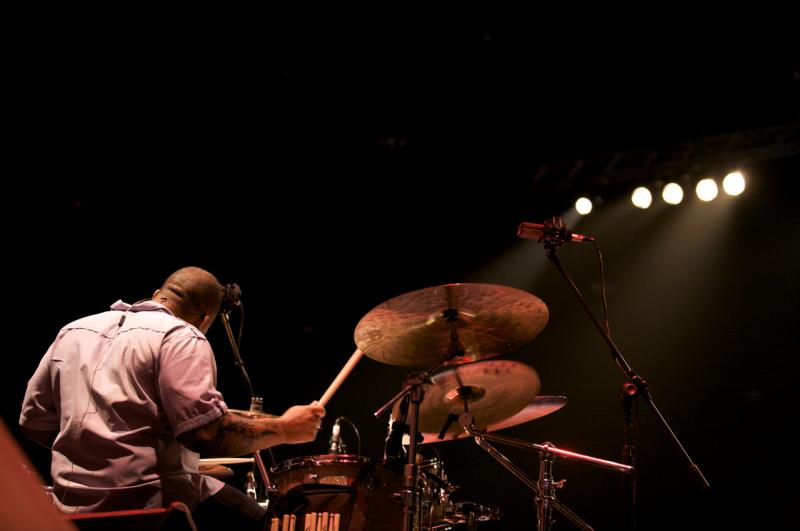 Lawrence switched to brushes for the gently swinging "The Times they are A-Changing." The Irish flavor to Hancock's version of the ever-relevant Bob Dylan song was provided by The Chieftains on the Imagine Project, and was beautifully recreated by Train, whose fiddle leapt into a jig at the beginning, before assuming a softer, accompanying role to her pristine vocals. More of Train's violin would have made for an interesting extended quartet improvisation, but the brevity of the number was probably the right answer to the epic group play of the preceding forty minutes. A soulful, driving "Space Captain" showed off the full range of Train's voice, with Hancock joining in on harmonies. Hancock's joyously mixed up blues, soul and gospel on the piano as Train's soaring pipes evoked Aretha Franklin in a celebratory conclusion to the set.

The roars of the crowd were answered with a fifteen-minute encore of "Chameleon," which revisited the heavy funk territory of earlier. Hancock seemed to be enjoying himself hugely on his Keytar, and he and Genus threw lines at Lawrence who responded in short, sparky exclamations, gradually taking the lead himself. Hancock then turned to the piano and keyboards to reroute the jam and guide the band across the finishing line. A group break dance provided a bit of fun at the end as the group bade Bangkok goodnight.

At 71, there are few funkier individuals than Herbie Hancock in music these days, and few with the openness towards music which made this concert, and any Hancock project, a journey of the imagination.