Herbie Hancock: A Life Of Possibilities 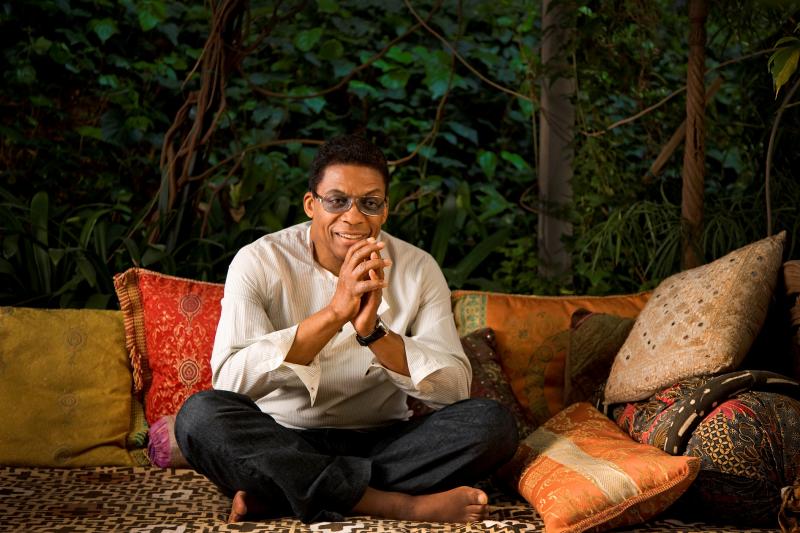 By CHUCK SCHULTZ
December 31, 2014
Sign in to view read count
Herbie Hancock is a world treasure. The following are a review of his memoir Possibilities and an interview.

During more than a half-century in the public eye, Herbie Hancock has been acclaimed as a jazz pianist and composer and an explorer of new musical forms. He rose to fame in the 1960s as a member of trumpeter Miles Davis's quintet, then became a top-selling headliner with his jazz-fusion group Headhunters in the 1970s and as a solo performer a decade later. He has won 14 Grammy Awards, an Oscar, a Kennedy Center honor, is the chairman of the Thelonious Monk Institute of Jazz, and is a UNESCO goodwill ambassador. Now 74, he describes his personal journey in a new autobiography, Possibilities.

As with most memoirs by famous people, the early parts are the most interesting. Hancock was born in Chicago and, at a young age, discovered the two things that would define his life: the piano and mechanical gadgets. He studied classical music at first, practicing for hours every day, and made his debut with the Chicago Symphony Orchestra playing a concerto by Mozart. He was 11.

He was a self-described nerd when he went to Grinnell College in Iowa to study engineering, but it wasn't long before his growing interest in jazz pushed everything else aside. He formed a group, began to arrange music, organized campus concerts and, back in Chicago, sat in with more experienced musicians. By the time he was 20, he had left college to join the band of trumpeter Donald Byrd in New York.

Hancock released his first record, which included his popular composition "Watermelon Man," in 1962. A year later, he joined Miles Davis and spent five years with the most celebrated jazz group of the time. "Miles represented everything I wanted to be in jazz," he writes. The charismatic Davis taught by indirection, seldom giving his sidemen instructions, except to keep the music interesting and fresh. But he once leaned over to Hancock at the piano and whispered five words in his ear: "Don't play the butter notes." Hancock tried to decipher the cryptic message, later thinking Davis may have actually said "bottom notes." But he interpreted the words to mean that he should play sparser chords with his left hand, allowing more harmonic freedom for other soloists. Many aficionados believe that Davis's "Second Great Quintet"—with Hancock, saxophonist Wayne Shorter, bassist Ron Carter and drummer Tony Williams—attained a kind of platonic ideal of modern jazz, expanding the art without exploding the form.

But by 1968, Hancock was getting restless. He left Davis to experiment with his own music and to indulge his growing interest in electronic instruments. It was an aesthetic choice that Davis himself would also follow, but one that remains deeply controversial to this day. Hancock describes the many keyboard instruments, synthesizers and other electronica that came to fascinate him. His bands in the 1970s "didn't play songs as much as we created a sonic environment," he writes. "We were open to any kind of sound from any kind of source"—as if that were a good thing. His music "required a tremendous amount of attention and patience from our listeners," he admits. "No wonder our audience was limited."

Like many other acoustic musicians who turned to electronic music—including his mentors Davis and Byrd—Hancock wanted to claim the credibility of jazz while performing something else. He may have been a jazz musician by training, but the fusion, funk and R&B of his Mwandishi and Headhunters groups of the 1970s and his hit "Rockit" in the 1980s had little in common with the musical vocabulary of Duke Ellington and Dizzy Gillespie. "I had to be true to myself," Hancock writes, ignoring the wails of critics, "and this was the kind of music I wanted to pursue."

ADVERTISEMENT
In 1986, Hancock won an Academy Award for his score of the jazz film Round Midnight. The rest of his book is, for the most part, a long jaunt through recording studios, the Greek islands and awards ceremonies, where too much of this sort of hobnobbing takes place: "Jimmy Jam turned around and smiled at me, and I just stood there dumbfounded. Taylor Swift grabbed me in a hug." And, before you know it, Hancock is back on stage, accepting the applause when his recording with Joni Mitchell, River: The Joni Letters, won the 2008 Grammy for album of the year.

Hancock writes extensively of how his Buddhist faith has informed his sensibility and how his occasional self-indulgences have affected his marriage to his East German-born wife, Gigi. He also reveals for the first time his addiction to crack cocaine, which he overcame by entering rehab treatment in 1999.

Hancock is beyond doubt one of the most important musicians of our time, whose model in all things—including this book—remains Davis. In 1989, Davis published an unvarnished autobiography, Miles, written with Quincy Troupe, that has become a classic memoir of jazz, full of musical insights, gossip and the raspy voice of truth.

Possibilities is the perfect title for a man that did so much for jazz, for music.

All About Jazz: Writing your own biography or memoir usually takes some time. When did you get the idea to start?

Herbie Hancock: Back in the late 90's Quincy Jones came up to me and said, "man you better start your biography before you forget everything." So it was always on my mind through various projects. In 2012 I got a hold of Bob Barnett and I liked the way he could capture how I spoke. We usually spent 6 to 8 hours a day putting the project together.

AAJ: Through the decades, the bands, and the projects, what can you instill in people interested in your music, your creative process, and your passion?

HH: Constantly try new things, you wanted to be cool but you also wanted it to matter in some form. I actually got to a point where I was so out there, I got tired of being untethered, if that makes any sense. You can't just follow the leader or be out there. You really have to find that middle ground. Most importantly though, you have to do the music for you.

AAJ: Miles (Davis) obviously was a major influence on you. What were some things that happened that people may or may not know?

HH: Miles loved music, and it didn't really matter what it was. Well mostly anyway. He taught me to continue to grow in my music, be willing to step outside my comfortable zone. He was also was a big fan of guitar players. Jimi Hendrix was someone who he truly was a fan of, the way he could create blues out of rock and vice versa. Word got out in 1968 that Miles wanted to work with Jimi so they tried to put that together. In the summer of '69 the rumors got stronger and some of us (myself, Wayne Shorter) were getting calls to get ready. Not long after that Jimi died. It broke Miles heart. I think about what may have happened should that have happened.

AAJ: You've practiced Nichiren Buddhism for over 25 years. Being a practicing Buddhist as well how do you feel that has helped your music, career and life in general?

HH: Nichiren Buddhism appeared in my life at the perfect time. Something about Buddhism people may not understand, but what really attracted me, is the fact that it happens whether you study it or chant about it or not. Nichiren Buddhism was like putting on glasses and seeing life more responsibly. It's made me a better human, it's opened my eyes and opened my heart. It improves the music process, realizing that music is my gift and I must not forget that.

AAJ: Marcus Miller mentioned he nicknamed you "Grammy" after you won Album of The Year for River: The Joni Letters and said that you winning was a victory for jazz.

HH: Marcus was one of the first people to contact me after I won. There was a state of euphoria and shock at winning. Also I realized that I won this for jazz music and that was seriously a big deal. Jazz isn't dead.