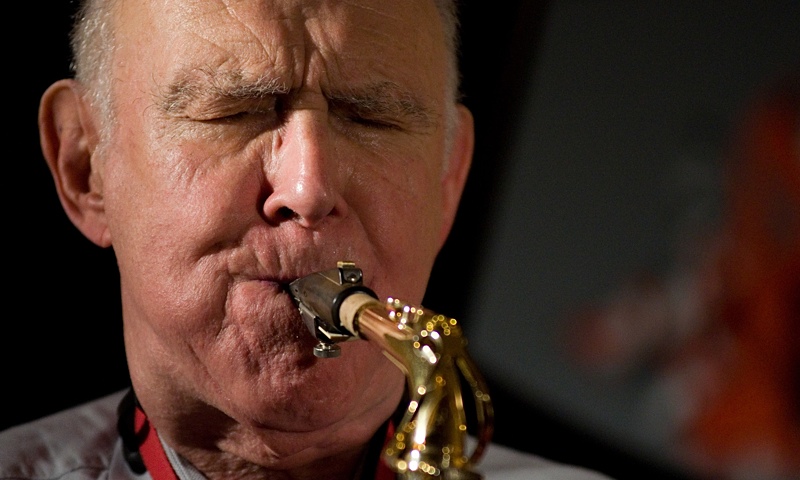 By JOAN GANNIJ
February 8, 2014
Sign in to view read count
I first met Herb Geller in 2002 at a concert in Amsterdam at the original Bimhuis jazz club. The band was gathering their equipment from the stage and we started chatting about being raised in Los Angeles. When I was a teenager, the tall and lanky genial gent was playing at the local clubs that my mother used to sneak me into. At 14, I was a much too young but sophisticated lady in my eye makeup and high heels, doing my best to look over 21.

The only club I got turned away from was The Pink Pussycat, a popular strip club on Santa Monica Boulevard where top jazz players earned a bit more than union scale and Geller was one of the regulars in the house band. The sharp-tongued political comedian Lenny Bruce was on the bill that week and when we got to the entrance, they just wouldn't take my mother's word without needing an official ID. Bruce got busted the same night for obscenity charges, so I guess I lucked out. Or else I could have witnessed an interesting piece of history.

Herb remembered that night as if it were yesterday and chuckled when he recalled the guys making bets over how long it would take police to pull the comedian offstage. I confided to Geller that I had always wanted to be a jazz singer, but had to concede I was more effective doing a spoken word performance with a bassist at my side, than emulating my musical heroines June Christy and Abbey Lincoln. When I told him that I wrote lyrics for jazz songs and that I was an old movie fanatic, his ears perked up. He said that he'd done a recording that paid tribute to Hollywood Leading Ladies and he wanted to put some lyrics to the tunes. We agreed to meet up the next day and discuss it further.

Over the next months we corresponded and I wrote some texts; then he composed music for some of my lyrics. But other projects intervened as they do and the timing was off. In the summer of 2003, I went to Oslo to research a travel book and looked up jazz pianist Per Husby who was performing at the Jazz Festival that week. Herb was also on the bill and he and his wife Christine joined Per and I for dinner at an unpretentious Chinese restaurant around the corner from the venue. Herb was playing like a man half his age that evening, and after the gig during an impromptu jam session, he held his own among the younger cats, that included Joe Lovano, who passed out props to him after the show.

We stayed in touch during the next decade, by phone, email and when he was in Amsterdam for a gig at the new Bimhuis along the waterfront. I was in Los Angeles when he died on December 19, 2013. I didn't hear the news until I was back in Amsterdam and got a call from a jazz musician friend in Finland. It's been a few weeks and I still can't believe it. I'm hoping that the Bimhuis or perhaps the Amsterdam Music Conservatory will host a tribute concert for him. Whether or not that happens, it felt important to create a farewell tribute to him by other musicians who have been inspired by him over the years. Jazz is about passing along tradition. It's also about honoring those who made a generous contribution to the tradition. Some people may have had the mistaken notion that Herb was an unsung jazzman, but his legacy will live on. And here are some testimonies to confirm that.

Rein De Graaff is a Dutch pianist and an active mover and shaker in the Netherlands jazz scene. "Herb was always kind of a legend for me," he said when I reached him by phone from Amsterdam. When I was 15 years old I had all his records on the EMARCY label. I first met him in the late 1990s ('97 I think) at a Jubilee Concert in Groningen, to celebrate my Stoom Cursus Bebop, a series of concerts and lectures. I invited Herb, Ronnie Cuber, Dave Pike, Benny Bailey, and Ferdinand Povel, who joined me and my trio for concerts and a jam session.

That was the beginning of an inspiring collaboration and friendship. We appeared on radio programs and a few years later did a Gigi Gryce project which resulted in a CD. It turned out quite well, he recalls. "Herb listened to the old records and wrote all the parts down. After that, we did a CD with just piano and alto, first takes only. It was in a studio setting that couldn't afford a quintet, so we thought why not just the two of us?" There were a lot of other gigs over the next years. One that stood out for de Graaff featured three generations of alto players. "One musician was 21, the other 42, and Herb, who had just turned 80, and that worked out great. Herb had an enormous database with the notes and lyrics of standards and ballads, 1000s of them. If I asked him about a certain song, he would look it up and send it to me. Sometimes when he was here on a visit, I would let him listen to something that he had never heard, like some obscure tune from the Four Freshmen. I'd tape it on a cassette and send it to him. He was inspired, totally into the music. He was always thinking about it, talking about it. He became the music."

Charles McPherson, veteran sax shaman, reputed for his years in the Charles Mingus band, offered this brief reflection. "Sorry to say, I never got a chance to meet Herb , but I was always an admirer. When I was a kid and just discovering Bird, Herb was one of the few alto players I liked. Although influenced by Charlie Parker like the rest of us, he had his own way and style. I wish I could have met him."

Ferdinand Povel, a Dutch saxophonist who also teaches at Amsterdam's Music Conservatory recalls meeting Herb for the first time in Vienna in 1966. In 1970-71 we worked with different orchestras in Hamburg and played for Ella Fitzgerald in Cologne. The Peter Herbolzheimer's Rhythm Combination and Brass orchestra in Hamburg had only one saxophonist so I would take Herb's place when he got too busy. When they celebrated his 65th birthday he invited me to be a soloist. He helped me tremendously with all sorts of things. When I needed a soprano sax to play in the orchestra, I bought one from him. In the mid 70s we did a concert in London at the Royal Albert Hall. While walking the streets of the city he bought me an exercise book for the flute, which I really had to work my way through. I took it quite seriously since it was a gift from him. He was a real gentleman, a great jazz improviser, and also an all-around musician, who played all the instruments—alto and tenor sax, clarinet, flute, oboe—at symphony level. For a studio recording he might have to do a few takes, and it was an endless flow of ideas and different each time. For another concert, I remember that his flight was late. He got to the gig, unpacked his horn, went on stage and just played as if it were nothing. Everything he did was with great skill and taste. He was a full professional, one of the top guys."

After his wife, the pianist Lorraine Walsh died in 1958, Herb played with Benny Goodman, Louie Bellson and Shelly Manne. In 1962 on a tour in Brazil with Goodman, Geller decided to take Stan Getz's advice and come to Paris to check out the scene. He boarded a ship bound for Europe and wound up in France where he soon got a job at the radio orchestra in Paris. He then moved on to West Berlin which was "the happening place where you could eat, drink and hear music 24 hours a day," according to his old friend Ack van Rooyen, a respected Dutch trumpet player. Herb joined the SFB as new lead alto saxophonist and the two became good friends. It was van Rooyen who introduced Herb to Christine, the woman who would become his second wife, and who was Best Man at their wedding. The two musicians also set up the Blue Note Club and Jazz Gallery where Herb invited cats passing through town to come and play: Tubby Hayes, Art Farmer, and Donald Byrd. In 1965, Herb moved to Hamburg where he joined the NDR orchestra, one of Europe's leading orchestras. In addition to composing for the orchestra, he composed for TV and film. One of his favorite projects was a recording that saluted Hollywood's Leading Ladies of the 1950s. He also recorded in smaller groups with visiting Americans that included Bill Evans and Joe Pass.

After he retired from the NDR in 1994 he maintained an active schedule that included playing, teaching, and recording engagements, He also taught at conservatories in Hamburg, Bremen, Hannover, Rotterdam, and Amsterdam, and authored "Crossover,'' a jazz instruction book. "He was a sincere, classy guy, a gentleman musician," is how van Rooyen describes him. "He believed 100% in his music and had a lot of integrity. Plus, he stood absolutely behind the music, and was also a supportive colleague. He was one of the few musicians that I knew that had played with Clifford Brown. I respected him not only as a musician, but as a man."

When I tell van Rooyen about the Oslo jam session during the Oslo Jazz Festival when Herb held his own surrounded by younger players, he smiles and says: "He had a great enthusiasm, and a never-failing appetite and interest for music until his 80s. In the last years when he played while perched on a stool on stage, Herb simply said, "I'm getting older." True that. But he still had the chops.