By GLENN ASTARITA
September 25, 2016
Sign in to view read count 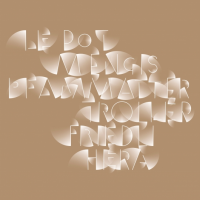 This Swiss ensemble maximizes the pristine sonic qualities of a church —St. Romain in Raron —that combines a pure, organic soundstage with the complexities of highly expressive jazz and improvisational overtures, including impressionistic interpretations of choice works by famed British classical composer Benjamin Britten. There are occasions when the ensemble projects a thought-provoking ideology of an avant-garde spin on Miles Davis' Bitches Brew jazz fusion era, which of course was groundbreaking yet quite unconventional for its time.

Every so often, trumpeter Manuel Mengis wreaks some havoc atop budding song-forms and swarming dreamscapes along with Manual Troller's steely electric guitar treatments. The ensemble bridges lament with optimism along with keyboardist Hans-Peter Pfammatter's haunting synth lines and polytonal voicings. It's a wanderlust of tumbling patterns and captivating tonal structures. "Hamada /Requiem aeternam" is a Britten composition framed with disparate angles and a doomsday-like march groove. However, each piece stands on its own with many surprises on a per-track basis.

" Meanwhile" is a whimsical piece that sounds like a German beerhall romp with off-kilter interludes and other subtle shifts in strategy that amiably diverted my attention. But "Hey," is primarily a free form fest, pumped up by Pfammatter's bizarre piano phrasings amid the frontline's maniacal flurries and the rhythm section's undulating beats. In addition, Mengis' edgy muted lines and the keyboardist's EFX-based noise-shaping movements add a rather fiendish hue to the moving parts. Indeed, contrasts and unanticipated delights are in abundance via the musicians' boundless creative sparks and cunning aberrations from the norm.