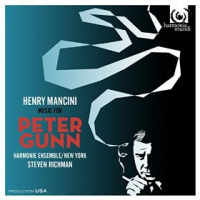 Who could ever forget the assertive, pulse-quickening theme from Peter Gunn, the urbane TV detective series that ran from 1958-61, with its jazz-centered score by the incomparable Henry Mancini. In case you are one of those who has (forgotten the theme, that is), you can now savor it anew (with much more music from the show), splendidly performed by the Harmonie Ensemble / New York, directed by Steven Richman. Among other things, the series showcased a small jazz group playing unassuming themes at Gunn's waterfront hangout, Mother's, while backing the establishment's stylish singer, played by Lola Albright. Although it wasn't the first time jazz had been used in film or on television, Mancini's seductive score was the first to gain wide public notice and approval, earning an Emmy award for the composer as well as two Grammies for the soundtrack album.

Even though written with specific scenarios in mind, it's remarkable how well these songs stand on their own, even after all these years. That's no doubt a tribute to Mancini's exceptional skills as a composer / arranger, one who was in many respects ahead of his time. Not only did he write music that enhanced a particular scene or circumstance, it was also integrated into the plot line itself, triggering pragmatic or emotional responses from the viewing audience and providing a suitable backdrop for leading man Craig Stevens as Gunn, songstress Albright and Gunn's detective friend Lt. Jacoby, handsomely embodied by Herschel Bernardi.

While soloists play no salient role in music that is essentially rigorous and narrative-driven, there are several brief yet impressive statements along the way, by tenor saxophonist Lew Tabackin, baritone Ronnie Cuber, vibraphonist Christos Rafalides, pianist Lincoln Mayorga and drummer Victor Lewis (who sits in for dedicatee Shelly Manne on "My Manne Shelly"), among others. It is the ensemble as a whole, however, that commands center stage and calls the tune most of the way, lending Mancini's persuasive music a tasteful small-group ambience in spite of its twenty-two member makeup. Richman, who is clearly a fan of Mancini's as well as Peter Gunn, takes few liberties, choosing instead to let the music speak for itself, as it has so eloquently since it was first composed.

For those who are too young to recall Peter Gunn and its dramatic impact on television music, this perceptive and well-recorded album provides a superb introduction. For those who do remember the series, it represents a nostalgic trip down memory lane to a time when jazz was often an important part of one's television viewing and listening experience.