Henry Grimes at The Stone: Alive at 75 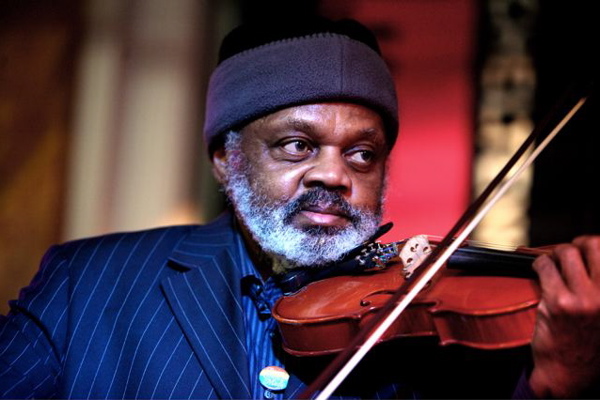 John Zorn honored the great Henry Grimes, bassist and violinist, with "a month of 75th birthdays" this November, consisting of a curatorship of his venue, The Stone, together with his wife, Margaret. A long weekend spent in New York City gave me a window on this important event, which marks a benchmark in the extraordinary and miraculous resurrection of the artist after a 35-year absence. Since coming back out of this time of personal crisis Grimes has risen above himself, gracing the true jazz devout with another helping of the driving, elusive and radically innovative playing that made him the foundation of units led by other major jazz artists of the '50s and '60s.

His curatorship at The Stone has brought into the limelight a host of remarkable and oftentimes neglected newer artists. On Friday, November 18 it was percussionist Newman Taylor Baker, who offered a transcendent evening of haunting hard-hitting history, vis, the evolution of drumming and the drum set, or "traps," from the time the American slaves were brought off the boat, up to the 21st century.

Taylor started out by charming and calming the audience with the humming, ringing sounds of a Japanese singing bowl which he rubbed and carried through the seats and sounded in front of everyone in attendance. After replacing the pot on the floor, he himself took a seat, took a deep breath and began to clap his chest, and then his thighs, in rhythm, his face in a state of serious meditation the whole while. Baker combined lecture with performance in the most artful way, explaining that this was called "hambone," a practice adopted by slaves as a consequence of being forbidden any possessions, such as any kind of drum.

Baker went directly to his traps afterward, explaining how the drum set is an indigenous American invention for which US Africans are largely responsible, the term "traps" being a shortening of "contraption," as the drum set offered a percussionist a kind of one-man-band approach to his art. Baker's drums are diatonically tuned, and it was an education in itself watching him get the tones just right before the show. His exhibition evoked the way the germ of song and rhythm preserved only in their minds on the trip over from Africa blossomed as slaves established themselves in the New World, both perpetuating and reflecting rebellion and movements toward freedom.

Finally, Baker picked up a washboard, placed a set of shotgun shells on his fingers and scratched out a micro-symphony of raw metal on the utensil's ribs, echoing the ribs he had smacked in the hambone section—and, with the shotgun shells symbolizing centuries of Black, righteous rage, let Freedom ring throughout the dark environment of the moment.

Featuring Friday was Native American Lee Mixashawn Rozie, who presented a solo set first, followed by a duet with Grimes in the second. Mixashawn gave a new—and decidedly, ancestrally ancient rendition to such popular songs as Prince's "When Doves Cry" (Purple Rain, Warner Bros., 1984) and Chuck Berry's "Johnny B. Goode" (1958), often changing the lyrics to fit his personal vision, and recited some poetry in addition to offering original material—and to be sure, he played tenor sax in a way that summoned up the holy spirits, sometimes Albert Ayler, but with the most carefully woven individual touch.

Grimes shone, as he always does, when the two duetted. At times they would bring back the fire music of the 1960s that Grimes helped forge. At others they would do such classics as the Hagen/Rogers standard "Harlem Nocturne" (1939), with the spice of a shaman, and the edge of energy music. At the end, Mixashawn succeeded in urging the entire crowd to sing along with him, which was exhilarating. It sanctified the night in the whole of East Village.

Grimes played a duet with pianist Connie Crothers on Sunday. Crothers achieves a spectacular percussive quality out of her instrument, which Grimes's hard-swinging bass pulled into outer space. Crothers said that playing the perfect solo is like "finding a wormhole in space," which she did indeed find that night. She also has a way of incorporating the niceties of bebop into her sweeps across the keyboard—sweeps of great grace—together with the dissonant clusters favored by an Alexander von Schlippenbach or a Cecil Taylor.

This is just a snapshot of a great, month-long event of historic significance. Other remarkable artists have included Edward "KIdd" Jordan, Marc Ribot and Matana Roberts—and the trio Harriet Tubman. Grimes is too humble to steal the spotlight every night from his collaborators. That said, his work is so powerful and passionate; and the scope of his mind so amazingly absorbent, he is always felt—especially when he plays; but even when he is laying out, the musicians of his particular choosing still embody and magnify his vision, like light streaming from a star.