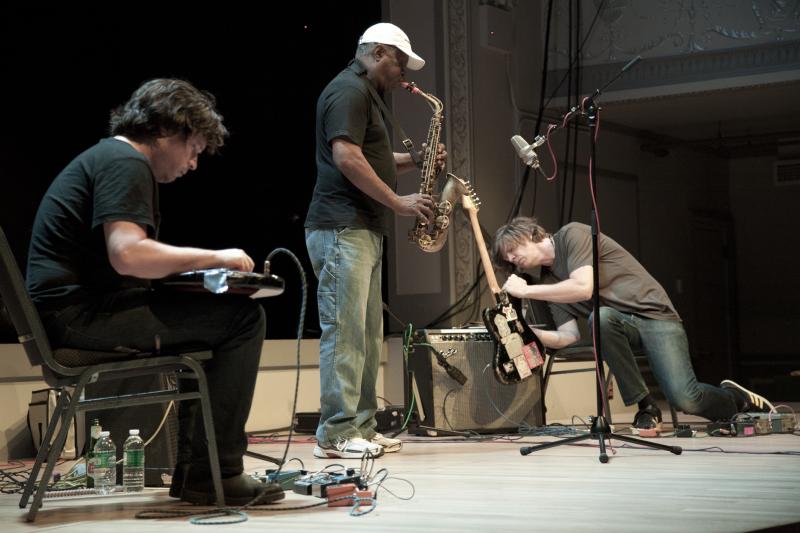 The Checkout is a monthly live broadcast for the WBGO radio station, presented by DJ Josh Jackson. The deal down at 92Y Tribeca always involves two formidable combos, often featuring a very familiar act coupled with a surging fresh presence on the scene. As the red light of "live" winks on, the night is governed by the demands of a tight start to the proceedings. Admission is usually reasonably priced, and the bar features some exciting special offers. Even though 92Y's location might be initially elusive, once its spot just below Canal Street is discovered it's suddenly very convenient for the nearby subway stations. The venue has a pleasing atmosphere and invariably pulls in a vigorous and varied crowd, even on a potentially slow Wednesday night. These factors combine to make the haunt a hot discovery that still emits an aura of newness. Besides jazz bands, 92Y also books a broad range of global music, hip hop, funk, rock and singer/songwriter artists, mostly presenting two or even three bands in a single session.

So, the night opened up with The Gilad Hekselman Trio, augmented by guest-starring tenor man Mark Turner. The Israeli guitarist favors a mainstream jazz tone, which can produce a certain aura of luminescent blandness, particularly when negotiating some rather robotic unison themes. His original pieces have an overly cerebral structure, almost predictable in their convoluted contortions. These brightly pastoral patterns seem to exist because they can, lurking at the opposite end to the alternative manifestation of bluesy earthiness in jazz expression. This is much colder, and distantly inspired by jazz rock fusion templates. Although Hekselman's music sounds more organic, it still falls prey to this self-consciousness. Turner and drummer Obed Calvaire were, fortunately, responsible for roughing up the foundation strictures, the saxophonist imparting a glowingly organic tone to his fleet circulatory statements—immediately closer and more intimately entwined with the listener. Calvaire adopted a harder attack, breaking up the beats with hard clatters, deft skitters and demonic fills.

The highly contrasting pairing between Hekselman and drummer Henry Cole's Afrobeat Collective soon led to a dividing of the stylistic tributaries, sparking a steady evolution towards poly-rhythmic ecstasy. Cole soon set up a liberating pulse with his two fellow Puerto Rican percussionists. In fact, the majority of this 11-piece Collective hailed from its leader's home isle. The audience might have expected to hear a fusion that gobbled up elements of classic Nigerian Afrobeat, descended from the mighty Fela Kuti, but the reality was that only a handful of numbers overtly embraced these qualities. Cole may well display a groove-lattice accumulation that's in the spirit of Kuti's old stickman Tony Allen, but the rhythmic emphasis was more on hardcore Puerto Rican conga and chekeré slapping and shaking. Cole's compositions merge jazz, funk, rock, salsa and rap, but not so much of the undiluted Afrobeat of his band name. In the end, though misleading, this didn't matter. Most audience members would be interested in all of these musical varieties anyway, and their permutations of ratio were consistently exciting, Cole creating a virgin form that became something beyond its constituent parts.

A particularly unusual element was the raggedly emotive rapping stance of poet Hérmes Ayala, driven by jagged keyboard chopping and fighting horn section riffs. In the spirit of Kuti, even if his word-streams don't sound much like the Afrobeat legend's fevered rants, Ayala operated his own distinctive and declamatory technique. John Ellis tore out frequent gobbets of tenor saxophone gristle, rough with a soulful funk texture, speeding and weaving around the combo's urgent pulse. Ripping solos were also sent flying from baritone saxophonist Billy Carrion Jr's and electric guitarist Matt Stevens, low end bullfrogging and Santana-esque tone-bleedings in turn. Pacing electric bass lines provided a liquid bed for all of the spotlighted higher end action. Next up, there was a hardcore vocal-and-percussion breakdown, Puerto Rican veering towards Cuban and Haitian territories. There was even room for some retro 1970s keyboard warbling, further widening the brew's already much-mingled seasonings.


Unusually, for the kind of improvised noise-shaping performance that might be expected from this trio, its gig was divided into a pair of 40 minute sets. Although each half was pointed and concise, the usual expectation would be for these free- form extremists to shoot a single, massive load. The intermission worked to their advantage, however, allowing a regeneration of forces, and a contrasting mood of attack. Another expectation could have been the imbalance between guitarists Thurston Moore and Bill Nace, when working with Joe McPhee on alto saxophone. This was the case, to a certain extent. McPhee might have been rationing his blowing, waiting for an opportune moment to pounce, but often the axe men wove self-sufficient tapestries of tonal torment, howling, droning, crackling, clanging, stroking, thranging on a mostly dense terrain. McPhee's chief avenue into this admittedly captivating wall of sound was to concentrate on the higher end of his range, melding in a minimalist fashion, spreading around the general bleed. He was frequently found standing at the perimeter, waiting for some space to enter.

This was the debut performance by this particular trio permutation. Nace already plays with Moore in their Northampton Wools duo. Nace was the more minimal of the two guitarists, spending time with drones and subtly-stroked strings, an acupuncturist's array of sticks and rods stuffed under his thigh. Both guitarists largely remained in their chairs, although Moore would crouch forward to wang his axe at his Fender amplifier, molding feedback constructions. Strumming and picking were virtually banned, with the emphasis on minute poking or footpedal sculpting. The first set was mainly drone and texture-based, but the second opened up with both guitarists battering their strings with drumsticks, setting up a rhythmic structure that immediately made it easier for McPhee to commune. The subsequent escalation was one of the peaks of a second set that was soon to prove more extreme in terms of its angular edges, drive and fury. This is not to say that it didn't recline into a blanket of restrained textures towards its conclusion. Like a child enjoying a tantrum, Moore stamped on two pedals in swift alternation, setting up a clanking toy-box repeat. McPhee eventually ripped up to the heights with a searing solo spiral, operating down in his lower range, now more successfully engaging with the guitar volume levels.

The Ravi Coltrane Quartet
Birdland
May 31, 2012


Tenor saxophonist Ravi Coltrane's latest quartet features pianist Geri Allen, bass man Dezron Douglas and drummer Marcus Gilmore. This Thursday night late set would be the last to have Allen onboard, as she was set to hand over to Aaron Goldberg for the weekend. A robust session of melodic, hard blowing might be expected, and this was ultimately delivered, along with a few stretches of introverted ballad- stretching. Allen's solos, even within the setting of a more turbulent tune, possessed an inner calm, as if she were embarking on a studied journey each time, flowing, decorative and insular. It was Coltrane and Gilmore who were responsible for the outward pushing, the tenor man repeatedly delivering ambitious escalations that invariably swerved away from predictability whenever it looked like a set resolution was about to arrive. The stickman, meanwhile, maintained a constant blur of detailed activity, relentlessly tumbling in midair, loaded with exotic detail.

The emphasis was on Coltrane's forthcoming album, and his original pieces—with a stray contribution from old cohort, trumpeter Ralph Alessi ("Who Wants Ice Cream?")—is set to appear on Coltrane's Blue Note debut, Spirit Fiction, released in June, 2012. Despite the smoldering escalation during an extended set (perhaps the reason why the first set had seemingly delayed the beginning of the second) it was the closing treatment of father John Coltrane's "Giant Steps" that emitted the greatest energy. Perhaps this was a predictable ascension, but the composition's immense resonance couldn't be avoided. The quartet deftly avoided replication, retaining structure and essence, but delivered one of the most sidestepping readings possible. Nostalgia was provided, but fresh realization subverted potential crowd-pleasing. The audience was indeed pleasured, but without having John Coltrane's versions triggered too obviously in its receptors.