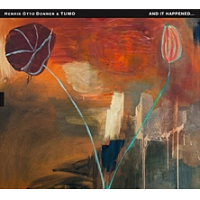 As a fanatical music consumer whose obsessive focus on modern jazz from places outside of the United States has become a source of bemused perplexity for my friends and family, I am always a little embarrassed when I encounter an artist whom I should have known about many years ago. Henrik Otto Donner is one such artist. I only found out about him a couple of years ago when I won a copy of his first recorded collaboration with saxophonist Juhani Aaltonen (Strings, Love Records, 1976) on eBay. I had no idea who Donner was at the time, but came away hugely impressed by his highly original and inventive compositions and arrangements. A lot of other folks in Finland must have felt the same way. A trumpeter who had led his own jazz and jazz-rock groups in Finland since the late 1960s, Donner achieved greater fame in his native country as a sound engineer, record producer, co-founder of its best-known independent record label (Love Records), chairman of the Finnish composers' copyright society Teosto, and as a composer, arranger and conductor.

A recent involvement with the TUM label has led to a mini- Renaissance of sorts for Donner, both as a player and as a composer / arranger. In 2003, the label released Strings Revisited, his second collaboration with Aaltonen. This was followed by a collaboration with singer / songwriter Dave Lindholm (More Than 123, TUM Records, 2010), and a monumental six album set, Live At Five Corners (Tum Records, 2011) that presented contemporary works with vocalists, a plugged-in jazz-rock band, orchestral and big band music, and a collaboration with pianist Seppo Kantonen. And It Happened... is Donner's third album with Aaltonen, and sadly his last overall as he passed away shortly after its completion.

And It Happened... presents the listener with a virtual cross- section of Donner's career. Of the album's eight tracks, the 1960s, the 1980s, the 1990s, and the new millennium are represented by two tracks, each. The vocal tracks ("Close Your Eyes," "Entreaty," "The First Summer," and "These Are The Days") are the most conventional. Though redolent of musical theater at times, each is enlivened by Donner's imaginative, Gil Evans-inspired arrangements. Johanna Iivanainen possesses a truly lovely voice; clear and unaffected, she seems to float effortlessly over the strings and horns. The lyrics, from texts by Emily Dickinson, Bo Carpelan, Johan Bargum, and Bengt Alfors, are earthy yet exquisite and touched with sadness and longing.

Most of And It Happened... is instrumental, however. "Junnudå?" is a ballad feature for Aaltonen's emotionally charged tenor backed by Donner's gauzy arrangement, heavy on muted trumpets, low brass, and gentle reeds. Aaltonen is also featured on the album's two longest tracks; "Have Me, Hold Me" and the title track. The former starts out as an up-tempo burner with roots in John Coltrane's "Giant Steps," before taking an abrupt turn into pensive, icy modernism and yet another into a mid-tempo modal stroll. Aaltonen's improvisation sparkles continuously throughout all of these changes, climaxing in a passionate howl accompanied only by orchestral sighs and stabs. The title track starts out with another brooding Aaltonen solo before the main melody chimes in. The bulk of the piece is an abstract orchestral dreamscape, surprising in its out-ness as Seppo Kantonen's piano and the dual drums of Stefan Pasborg and Markku Ounaskari add to the turbulence. "For Friends and Relatives," perhaps Donner's oldest and best-known composition, glowers with bluesy truculence before resolving-with nearly insane glee-into a boogaloo-style rhythm.

Though not originally intended as such, And It Happened is a sweet and wistful last testament from a man whose life was literally saturated in music from beginning to end.

Junnudå?; Close Your Eyes; Entreaty; The First Summer; Have Me, Hold Me; These Are The Days; And It Happened…; For Friends And Relatives.

About Henrik Otto Donner and TUMO