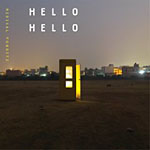 On Hello Hello, the fusion of Western electronic music with the traditional and folk music of India, synthesized by the New Delhi-based instrumental and production team of Guarav Raina and Tapan Raj, sounds nearly complete.

Built from Indian percussion, string, vocal and melodic traditions, and strung together like decorative lights with electronic samples, loops, and beats, Hello Hello crosses over world cultures and historical epochs. One tune sets a 19th century poem in a 21st century dance club mix; another updates a traditional Indian love song with modern U2 guitar electronics; yet another rips through a Led Zeppelin tune like a South Indian tsunami. It's like Hello Hello was sequenced with your iPod "shuffle" feature already programmed in!

A strong "Tonic" typifies this sound: Vocalist Malini Awasthy caterwauls, coos and conjures a spectral presence atop a percussion bed that thunders hard yet flows like liquid mercury, parts briefly when a spoken hip-hop interlude flows into its stream, then closes back up and once more engulfs the whole. Noa Lembersky, another female vocalist, leads this tribal stomp through Led Zeppelin's primal "Four Sticks" with a wailing style that changes the vision of, but no less powerfully portrays, Robert Plant's original vocal, awash in the nomadic desert strings sound toward which Zep groped in "Kashmir."

"Naina Laagey" grows from roots in the Indian "bhajans" love song tradition, a simple piano fragment and guitar quietly blossoming into an electric atmosphere that descends like cloud cover on a contemplative twilight. The sacred sound of Papon's vocal resounds with the eternal implications of temporal beauty.

But everything is not sweet and light, not in India or anywhere else. "Desolate" opens with an ascending scale doubled by instruments and vocals that grows in volume and intensity as it pulls more vocals and instruments—crunching electric guitar chords, serpentine strings, pummeling percussion—into its swirling vortex of sound. This hurricane tempo seems to drive "Desolate" to the point where the music can only explode...

As multicolored and vibrant and contradictory and breathtaking as the nation of India, the musical landscape of Hello Hello constructs upon the foundation of ancient traditions a new world designed for tomorrow.