By GENO THACKARA
April 1, 2019
Sign in to view read count 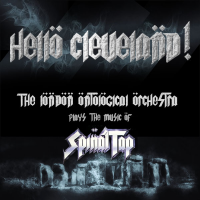 The band may have been fictional, but the music is all real—and turns out to have an impressive staying power, even today. If you associate the name Spinal Tap with cheesy 1980s rock and roll, it's time to think again. The members of the London Ontological Orchestra (assembled and named in honor of the group's mystical interests) are stars well-known in the jazz world, though working pseudonymously here in the interest of highlighting the music foremost. The resulting Hello Cleveland! makes a horn-heavy and surprisingly suave toe-tapping homage to the outfit that launched a hundred (or, well, probably at least a dozen) puppet shows.

While the source songs have deservedly gotten their share of criticism for puerile lyrics—"treading water in a sea of retarded sexuality and bad poetry," as a review once famously put it—the LOO's mostly-instrumental treatments (an occasional spoken vocal aside) manage to bring out the depth and sophistication these pieces had all along. Did anyone suspect that "Flower People" had such a smart tricky chord progression buried among its hippy-dippy verses? Who knew "Gimme Some Money" could swing in such tasteful style? The treatment of "Big Bottom" even faithfully leans toward the low end, though this time it's with a raunchy trombone spot that would be the envy of any burlesque act out there.

The infamous "Jazz Oddyssey" suite of their mid-career experimental phase made an uneasy fit with the Spinal Tap sound, but the cast of Cleveland! has no compunction about reinventing it in the brightest of all keys. The players sink their teeth in with wild exuberance over the course of the twenty-five-minute centerpiece, making the catalogue's black sheep into nothing short of a revelation.

ADVERTISEMENT
The band's classics are nicely complemented by a few original bop-flavored groovers written in tribute to the legendary rockers, and it was a especially brilliant idea to mash up Tap's "Springtime" with the famous Gil Evans/Miles Davis big-band arrangement of "Springsville." Even so, it's the gorgeous closing ballad that arguably takes the cake the most. Come for the novelty and stay for the swing—this hour is an irresistible romp, and afterward it's impossible to ever hear these songs the same way again.