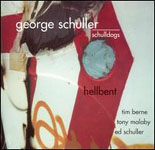 Hellbent is an apt title for this disc: each player looks insistently forward, spewing energy and casting aside the shackles of restraint. Even during quieter moments (which are ample), one has the sense that the quartet is headed somewhere. This is most definitely a live performance, spontaneous and unfinished.

That's not much of a surprise given the players who joined forces to make this record. Drummer George Schuller may have penned the compositions, but he was insightful enough to make them loose and give everyone a chance to make a personal statement. They sound like deconstructions, rather than elaborations, of themes. Tim Berne, who has made a career out of this sort of approach, fits right in—and frankly dominates the group sound much of the time. He plays alto with his usual abandon, avidly joining in when structure is called for and then coaxing the full range of sounds available through his instrument when he gets a chance to step out. His stark, raw tone renders an organic, fallible quality to the music. Tony Malaby's voice on tenor may be distinctive and expressive, but he just as often as not ends up a foil for Berne's sonic explorations.

George Schuller's talent on Hellbent lies in his ability to keep the quartet together through periods of order and disorder. He uses drums, rather than cymbals, much of the time to sharpen edges and provide contrast. Schuller's playing is particularly refreshing because he doesn't generally play on (or off) the beat—instead, he comes in and out unexpectedly, dancing around the pulse. You always know it's there, but nobody's offering any formal demonstration. Bassist Ed Schuller cooperates eagerly, generating fuel for the mother ship. (And that combination makes it paradise for Berne, whose rhythmic sense is decidedly angular and spontaneous.)

Most of the tunes on this record are extended pieces, heavy on improvisation and light on arrangement. Given the talents of the players involved, it's a perfect match: an intuitive, spontaneous romp. Fun to play, and fun to listen.

Visit Playscape on the web.