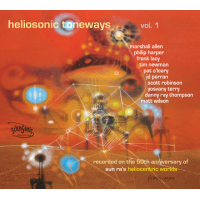 Many albums in the Sun Ra musical universe have a great backstory, but the story behind Heliosonic Toneways Vol. 1 is better than most.

Exactly fifty years from that day—April 20, 2015—ScienSonic Laboratories convened longtime Sun Ra Arkestra members Danny Ray Thompson and Marshall Allen (the only known surviving participant of that '65 Heliocentric session) to lead an ensemble tribute to "the distinctive instrumentation and sonic character of the original albums." Allen and Scott Robinson played the instruments that Ra handled on the original recordings (the bass marimba heard on Vol. 1 and the bongos and clavioline from Vol. 2), and Alderson returned to produce it.

Heliosonic Toneways Vol. 1 was improvised in the studio and is presented in the order in which it occurred. Nothing seems to connect one piece of music to another, but each piece contributes a distinct chapter to the outerspace epic told by the whole. "Heliotone 2A" shoots up from the electronic keyboard sound in which Ra rooted much of his solo music; bowed bass pulls out subsonic echoes of the bass marimba while electronics and contrapuntal horns paint abstract jazz colors in the sky. Called to order by various reeds and brass that flutter together like a flock of birds, "Heliotone 2B" coalesces into an Ellingtonian swing feeling led by the drummer's tap-dancing snare.

"Heliotone 3B" erupts (or deteriorates, depending) into an ensemble free-for-all that sounds like a marching band intersecting with the Duke Ellington Orchestra in a pool of psychedelic LSD. These same horns blast "Heliotone 7" skyward, leaving colorful rocket trails for the drums to dance in. Ushered in by acoustic piano and plaintive trombone, "Heliotone 4B" seems to at least start in New Orleans, but where it ends up as it floats away on no discernible tempo or meter seems like anybody's guess.

Heliosonic Toneways Vol. 1 lives up to the message printed on the back of those original 1965 album jackets: "You never heard such sounds in your life."