By JOHN EYLES
December 1, 2014
Sign in to view read count 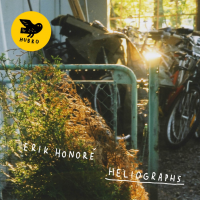 Erik Honore has such an impressive curriculum vitae that it is difficult to know where to begin... In association with his frequent collaborator Jan Bang, since 2005, he has been responsible for the annual ground-breaking Punkt Festival in Kristiansand, where all concerts are remixed live. Over the years, that feature of the festival has attracted such impressive names as Laurie Anderson, Gavin Bryars, Brian Eno, Jon Hassell and David Sylvian. As well as such an international cast, Honoré has been associated with many of the top musicians in his native Norway, including trumpeter Arve Henriksen, percussionist Ingar Zach, vocalist Sidsel Endresen and guitarist Eivind Aarset, all of whom contribute to this album alongside Honoré and Bang.

Despite that stellar line-up, Heliographs is credited to Honoré alone, the first such album in his sizeable discography. Honoré deserves sole credit as he is the only musician to be featured on all nine of the album's tracks, is credited as a writer of all of them, and was also responsible for producing, engineering and mixing it—yes, truly, a solo album. Although the individual contributions of other musicians colour the tracks on which they appear, the overall sound of the album is typically Honoré, featuring his meticulously constructed tracks which create a soundscape like no other. Rather than featuring strong melodies, they are complex, multilayered and rich in detail, providing ideal settings for their featured musicians.

Right from the off, Heliographs makes good use of the musicians available, by playing one of its trump cards early on—vocalist Sidsel Endresen. Featured on three tracks, her voice fits hand-in-glove with Honoré's music, its tremulous quality conveying great emotion and contributing to the album's unique atmosphere. Just as vital to that mood is Zach's unobtrusive percussion—featured on five tracks and a key ingredient of each one, despite never laying down a heavy-handed rhythm. Truly, an impressive object lesson in subtlety.

The same is just as true of every other player here, no matter how large or small their contribution. On the three tracks where he is featured Aarset's guitar commands attention for its taste and restraint, each contribution a perfect piece of the jigsaw. Unsurprisingly, the same is just as true of Henriksen's trumpet—which blends well with the guitar on "Strife"—and the violin of Dutchman Jeffrey Bruinsma (of Zapp 4). Ultimately, however good the individual ingredients are, it is Honoré who deserves credit for blending them all together into an engaging and beguilingly beautiful whole. Bravo!