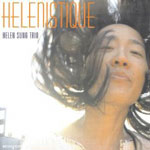 The clean, uncluttered sound of the piano trio gets a refreshing workout on Helenistique, Helen Sung's tribute to the jazz standard. For her second recording, Sung works with drummer Lewis Nash and bassist Derrick Hodge.

A classically trained pianist, Sung leads her trio well: she solos with authority, intelligence and grit, especially on Rodgers and Hart's "Lover" and above the stuttering rhythms of Thelonious Monk's "Bye Ya," but she knows when to retreat and let Nash and Hodge sparkle. Hodge has played with hip-hop stars like Mos Def and Q-Tip, as well as a host of jazz luminaries, among them Terrence Blanchard, Mulgrew Miller and Clark Terry. His warm bowed solo on Rodgers and Hart's "Where or When" reveals the song's inner melancholy. Nash's hi-hat adds a cushion of subtle rhythm.

The album's strongest feature is the musicians' shared sense of celebration. Not only does the trio's sound project great affection for this music, but the performers demonstrate a ready affinity for each other's contributions. The band churns through Kenny Barron's "Voyage," one of the most harmonically rich numbers on the album. The sound is suffused with a sense of exploration, and each player digs deep during solos. Sung's left hand drives the music as surely as Nash's crisp precision on the snare or Hodge's percolating bass.

Joe Henderson's "Black Narcissus" offers some of the album's brightest moments, from Sung's quietly astonishing piano playing to Hodge's searching bass and Nash's kaleidoscopic yet restrained drumming. Sung's chords are lush, her arpeggios and trills feathery. Her ability to corral the tune after her bandmates' brief excursions reveals her poise and flexibility.

The album includes one of Sung's own compositions, the funk-infused "H*Town," and Prince's "Alphabet Street." They aren't exactly standards, but they show off the trio's versatility. Her solo tribute to James P. Johnson on his "Carolina Shout" bounces with fervor and wholesomeness. Duke Ellington's "Cottontail," Ann Ronell's "Willow Weep For Me," and Arnheim, Tobias and Daniels' "Sweet and Lovely" round out the album. Sung arranged every piece.

Sung graduated from the inaugural class at the Thelonious Monk Institute of Jazz Performance at the New England Conservatory of Music in 1997. Since then, she has played with Terry, Wynton Marsalis and the late Jackie McLean, among others, and toured with Herbie Hancock and Wayne Shorter. She is a musician of serious promise.

Visit Helen Sung on the web.