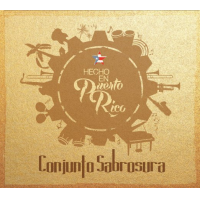 Salsa music is intended for dancing. Long before festivals and concerts became the norm, this music was spawned in nightclubs where people went to dance. The virtuosity of the musicians was taken for granted, and they were expected to deliver an established set of no-nonsense entertainment for the paying customers. Conjunto Sabrosura is an intense salsa orchestra that follows that lineage, and Hecho En Puerto Rico establishes them as a force to be reckoned with.

Based out of San Juan, they offer an invigorating blend of son, rumba, and guaracha that founder/musical director Ihosvany Negret brought with him from his homeland of Cuba, playing what is called "salsa gorda," or old school salsa. Negret's wife Mayte Pérez—also from Cuba—is the groups vocalist (sonera) and the obvious main attraction. With a voice reminiscent of the magnificent Celia Cruz, and possessing a natural rhythmic conveyance, Pérez delivers a polished performance with gaiety and veracity.

The show opens with "Canto A Ponce," which has an interesting back story. Negret sought asylum in this southern Puerto Rican city while with the Cuban sports delegation in the 90's and this is done in gratitude. With deft arranging by Joaquin Betancourt, the record continues along the Cuban son tradition on "Pregón Llegó," and "Mala Maña-101" highlighted with high flying trumpet work by Luis Aquino, and solid piano montuno by José Prieto, who shines throughout the production.

Three additional vocalists are brought in for the title track, allowing for amicable exchanges on this percussive driven guaguanco that targets the dancers, who will not be able to resist. "Con La Espuela," and "Quimbara," are adaptations of traditional Cuban compositions, the latter dedicated to Celia Cruz, who immortalized the song. Colombian syncopation is obvious on "Me Voy Pa' Cali," and "Mi Rumba," with lyrics by Pérez, invokes the legendary rumberos who popularized this music. Puerto Rico's distinctive plena beat is fused into the mix on "Pa' La SanSe," a nod to Old San Juan's famous yearly street celebrations honoring Saint Sebastian.

As any quality salsa outfit, Conjunto Sabrosura gives the musicians a chance to show their collective chops, and "Sabrosura Viva," is that opportunity. A blistering rumba where the drummers put the heat on the trumpet amidst frenetic interplay, it is an instrumental showcase where the vocal refrain expresses encouragement. This is salsa music done in the manner of the premier bands as El Gran Combo, and La Sonora Ponceña, who are still active today. Conjunto Sabrosura reignites the Cuban fire which was the primordial source, and have incorporated Puerto Rican elements and nuances. They are not only a band to watch out for, but definitely to dance to.